Greenlight > Games > punch lunch's Workshop
Greenlight is being retired. For more information on how to submit games to steam, refer to this blog post.
This item has been removed from the community because it violates Steam Community & Content Guidelines. It is only visible to you. If you believe your item has been removed by mistake, please contact Steam Support.
This item is incompatible with Greenlight. Please see the instructions page for reasons why this item might not work within Greenlight.
Current visibility: Hidden
This item will only be visible to you, admins, and anyone marked as a creator.
Current visibility: Friends-only
This item will only be visible in searches to you, your friends, and admins.
Don't Move
Description Discussions12 Announcements21 Comments737 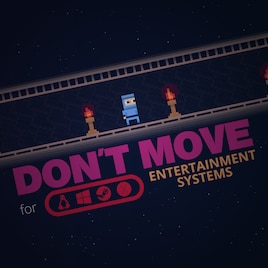 punch lunch
Offline
See all 86 collections created by punch lunch and other people (some may be hidden)
In 1 collection by punch lunch
HaxeFlixel Games
5 items
Recent Announcements View All (21)
Don't Move is coming soon to Steam!
April 17, 2016 - punch lunch

Check out more details in the offiical post and take a gander at the store page.

Thanks for your patience! You rock!

Hi! Normally I write these things in a sort of passive tense to suggest that Don't Move is made by an amorphous conglomerate of shadowy individuals. But it's just one guy! My name is Steve and so here is the deal.

As you've probably noticed, Don't Move has been greenlit for some time, and is still not available on Steam. That is not great! Especially considering how awesome it was that you voted for my silly game. Yes, you! Thanks for that.

So it's not on Steam for a pretty simple reason: I am pretty busy now! When I submitted Don't Move to Steam I was more or less a full-time independent game developer, so I had oodles of time to spend maintaining the Greenlight page and my other games and stuff. But late last year I got an (awesome) job AND landed a freelance game development deal (which was also awesome) that I worked on evenings and weekends.

As a result, I devoted zero time to Don't Move. For several consecutive months! Which is not great. I really would have loved to wrap up the game but I just couldn't. However! I did integrate a whole bunch of achievements and some new secrets and stuff that you should enjoy. But now I'm at the part where I need to have considerable time to sit down and make sure it all works and I don't have that right now.

The reason I'm writing this today is because the date I had been telling people was "mid-May" which actually meant May 19 and that day has come and gone. I am very sorry! I really do want to get the "definitive edition" on Steam, but the game just isn't in a state where I can do that.

So: I'm going to be putting as much time into finishing Don't Move as I can, and it will not be much time, but I do hope that you can understand. I have had many people ask me "what is the deal" and that's great! Because 1) hey neat people care about my game and 2) it serves to remind me that oh, right, I should work some more on that thing. I really appreciate that!

As soon as I have a firm release timeline I will let you know. FYI all of the Steam badges and achievements and leaderboards and cards are ready to go, so that much is done. Also I am not going to be able to have the most achievements on Steam because that honor goes to Tales of Maj'Eyal which has certainly earned the distinction with 1,386 achievements total holy cow. I do not have that kind of dedication. How many achievement points is that even? I do not know.

Okay that's probably enough for now. Let me know if you have questions! I will totes lurk this thread so if you have a question or something ask away. Or don't! You can just keep that question to yourself, and no one will ever know. EVER

Don't Move is an experimental puzzle platformer with a focus on ludonarrative dissonance and player investment manipulation. My goal was to create a game that explored these concepts in a familiar setting (the classically-styled platformer) with a minimum of distractions from the core concept. Of course, there are also lots of secrets!

Don't Move will be available on Steam for only $1, which will include access to all versions of the game, including Android, as well as the soundtrack. Everyone who has previously purchased Don't Move (via Humble, Desura, IndieGameStand. or itch.io) will get a complimentary Steam key!

Not only will Steam allow me to bring my game to a larger audience, it will also vastly simplify the process of installing and updating. Furthermore, I plan to take full advantage of Steam features such as achievements, trading cards, leaderboards, Big Picture Mode, cloud saves, and support for SteamOS.

"Don't Move, for me, quickly drives home the point that achievements and challenges can be misused and result in 'non-optimal gameplay decisions... past the point where the game is fun'."
- {LINK REMOVED}IndieGames.com ({LINK REMOVED}link)

"Don't Move is supposedly a game about 'ludonarrative dissonance and player investment manipulation'. What it actually looks like is a twisted social experiment of some sort."
- Kotaku (link)