Store Page
Arma 3>  Workshop > HeadUp's Workshop
This item has been removed from the community because it violates Steam Community & Content Guidelines. It is only visible to you. If you believe your item has been removed by mistake, please contact Steam Support.
This item is incompatible with Arma 3. Please see the instructions page for reasons why this item might not work within Arma 3.
Current visibility: Hidden
This item will only be visible to you, admins, and anyone marked as a creator.
Current visibility: Friends-only
This item will only be visible in searches to you, your friends, and admins. 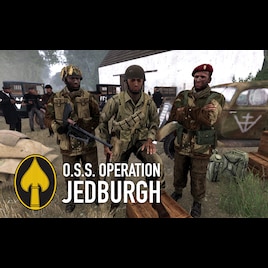 HeadUp
Offline
See all 3 collections (some may be hidden)

This item has been added to your Subscriptions. Some games will require you to relaunch them before the item will be downloaded.
Description
Lead your men to victory and take part in the liberation of France as an American OSS (Office of Strategic Services) operative during the legendary Operation Jedburgh. After months of training and preparation, your Jed Team made the drop into France the night of the D-Day invasion, establishing contact with local Maquis resistance in Orglandes, providing training, arranging supply drops, and serving as a vital link to SFHQ in London. Today, all that will be put to the test as we move to prepare the region for the rapidly advancing Allied 8th Army.

mason77 Apr 11 @ 4:11am
@HeadUp
Thanks for putting out all the effort to make these. Trying out the Ranger raid now:)

Thanks for playing and for the kind words!

HeadUp  [author] Feb 20 @ 11:37am
@domokun
Although it was "written" as a single player story, I'm willing to modify it for coop play if you can help me answer a few questions along the way. First, coop for how many? Next:


The mission includes two phases in Chapter II and Chapter III where the full 3-member Jed team is playable. However, at a couple different points, the player is forced back to the main character. Would any of those slots become playable for other players if ran on a coop server?

RIP LoK and TF42, they are no longer playable, and can't be loaded or even merged due to changes to the Reshmaan addon, which is no longer supported by the author. I was able to merge a couple bits and pieces, nothing viable tho.

domokun Feb 19 @ 7:11am
Hi mate, any chance you could modify this so that it could be playedcoop? I noticed that since last year most of your missions offer coop. Also what happened to your amazing Lions of Khandahar campaign?

Thanks for playing, hope you enjoy! Would be interested to hear your playthrough and impressions. I made and released two proper campaigns for Arma 2/OA many years ago, long story short there's just no way I'll ever have the time to do a full-on campaign with voiceover. I guess one of the things that discouraged me is that neither of those two campaigns can be played anymore due to updates to some of the addons. This mission is the most involved I ever could get in a single release, I think you'll find it campaign-like as it has 3 different chapters which could be enough for their own separate scenarios. I have a few more scenarios on my laptop I'm trying to button-up and release - the next one is likely a commando raid in Norway. Stay tuned!

Thanks for checking it out and commenting. Having gone thru the effort of including voice acting in my Arma 2 editing days, I decided to leave it out of my Arma 3 missions. If enough people want it and a few good voice actors step forward, I'd be happy to revisit it. Hope you were able to enjoy the mission otherwise.

Slovakian Lynx Jan 19 @ 10:33am
Just another of those WW2 missions with disabled radios and no voice acting...
< >