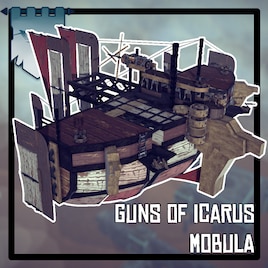 48 items
Description
The Mobula is one of many airships seen in the game Guns of Icarus. Unlike most ships in the game, this airship has its gas balloon positioned underneath its hull. It’s wide structure causes it to have poor maneuverability and speed, but it makes up for that with a multitude of forward facing weaponry. It also has great vertical maneuverability. There are 5 weapon stations on the Mobula. This creation boats a cannon in the middle, and a flamethrower, explosive missiles, kinetic missiles, and crossbows on the sides.