Store Page
Unturned>  Workshop > Dpace's Workshop
This item has been removed from the community because it violates Steam Community & Content Guidelines. It is only visible to you. If you believe your item has been removed by mistake, please contact Steam Support.
This item is incompatible with Unturned. Please see the instructions page for reasons why this item might not work within Unturned.
Current visibility: Hidden
This item will only be visible to you, admins, and anyone marked as a creator.
Current visibility: Friends-only
This item will only be visible in searches to you, your friends, and admins. 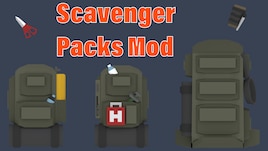 Dpace
Offline
See all 1005 collections (some may be hidden)

This item has been added to your Subscriptions. Some games will require you to relaunch them before the item will be downloaded.
Description
The Mod
The Scavenger Pack is a modified backpack meant to suit the creator's needs. It has a has a large storage but is bulky and uncomfortable. It can be crafted with an alicepack, 4 scrap, 1 sewing kit, and scissors. 8x12 96 slots

The Oxygen Pack is similarly modified like the scavenger pack but features an oxygen tank on the side. This feature allows the wearer to breath underwater when paired with a scuba mask, and also have a large amount of storage. It can be crafted with a Scavenger Pack, a diving tank, a sewing kit, and scissors. 10x14 140 slots

The Freight Pack is the most extensively modified backpack of the three. It has nearly 3x the storage of the Scavenger Pack or Oxygen Pack, but Is extremely large and difficult to conceal. It can be crafted using an Scavenger Pack, 4 cloth, a sewing kit, and scissors.12x20 240 slots


Scissors are used to cut fabric and thread. It can be crafted using 2 metal sheets and is a necessary tool to craft the backpacks.

The Sewing Kit is a necessary component in scavenger packs. It can be crafted using 2 rope, 2 tape, and 1 stack of nails.

This mod is best used for Survival and Role Play purposes so feel free to use this mod on any single player world or server. Do not attempt to reupload or edit this mod without the expressed permission from me.

My Server
My Discord server which also uses this mod: https://discord.gg/USAnKJ4V9A

Donations and Commisions
If you would like to donate or commission a mod from me contact me through discord, Im Dpace#6666.

Mod News
If you notice a problem or have a suggestion leave a comment below or dm me on discord.

1/7/21 Complete overhaul and expansion of the mod. Added Oxygen pack and Freight Pack to the lineup. Backpacks now require a sewing kit and scissors as a reusable tool to be crafted. Also despite the mod being 5x larger in content, it is now only .4mb compared to 1mb in the old version. This should be a big bonus for server owners as it will load much faster now!

爆米花机罗兰 May 17 @ 10:48pm
bug report:
cannot find the opinion to craft scissors, even though I get full level of crafting

Probably Uzi May 7 @ 2:30pm
having the same problem with Dapper_taco. it goes in is when I try putting it on and I can't unequip it unless I have an extra backpack on me. tried reinstalling the mod and see if any mods were overlapping but nothing seems to work. any solution to this?

Vyrxs- Apr 8 @ 4:25pm
Pack turned invisible when i put it on, shows up in inventory as an alice pack when equipped, but as basic scavenger just in my inv

Dpace  [author] Feb 14 @ 9:29pm
@dapper_taco that seems like a mod overlap issue, see if any mods have share the id of the freightpack or just delete and redownload the mods.

dapper_taco Feb 14 @ 6:18pm
Dont know if your aware of this but when I used your mod, I wasnt able to out on the freighter pack normaly. I can only put it on by dragging it onto the player and it is invisible on the player. It only takes the name of the previously worn pack, so if I was wearing a spec ops rucksack, then it would be called the spec ops rucksack. At that point it would still be missing its model but would keep its 240 slots. Can you fix this?