Greenlight > Games > Little Big MMO's Workshop
Greenlight is being retired. For more information on how to submit games to steam, refer to this blog post.
This item has been removed from the community because it violates Steam Community & Content Guidelines. It is only visible to you. If you believe your item has been removed by mistake, please contact Steam Support.
This item is incompatible with Greenlight. Please see the instructions page for reasons why this item might not work within Greenlight.
Current visibility: Hidden
This item will only be visible to you, admins, and anyone marked as a creator.
Current visibility: Friends-only
This item will only be visible in searches to you, your friends, and admins.
Gangs of Space
Description Discussions0 Announcements3 Comments181 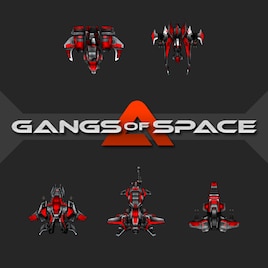 View Gangs of Space in the store

To all Gangs of Space Alpha Testers and everyone who has expressed an interest in our game, we wish you an excellent New Year for 2015!

As as far as we are concerned, this year is starting on a VERY good foot, since Gangs of Space has just been Greenlit, and thus will be available on Steam during this year!

We are giving more details about this remarkable turn of events and the past 3 years of development in this retrospective[www.gangsofspace.com].

We want to thank each and every one of you from the bottom of our hearts for your support, and hope to see you all ingame during the upcoming wave of Alpha Test sessions which will start soon!

We presented Gangs of Space for the first time to the public and the press at the Bitsummit MMXIV event, from March 7 to 9 in Kyoto, Japan.

With all the time and energy we spent on this project, our stress and fatigue levels were at the maximum, but fortunately the reception of the game has been really great!

The event ended with the attribution of the "BitSummit Awards". More than 120 indie games were shown at the event, for only 9 awards... Could we be one of those? The award ceremony starts with our hearts beating at 200%. Sound Design award... nope. Visual Design Award... nope (that would have been a shock compared to some awesome games that were on display!). And suddently, the Game Design Award goes to... Little Big MMO, for the game Gangs of Space!

This is our first award for Gangs of Space (of a list that we hope will be very long ^_^), and we are very humbled to get it in such an awesome event. We dedicate it to everyone that has been supporting us until now in this crazy adventure:

You can learn more about the game and participate in the Alpha on https://www.gangsofspace.com.

Gangs of ambitious players compete against each other to conquer the most territories in hostile planetary systems, using ships and items looted from destroyed enemies, or designed and built in player-owned space bases.

The Gang which accumulates the most territorial, economical, technological and political influence is awarded the rank of Quadrant Administrator, and is allowed to write the laws of the universe.

Gangs of Space has been Greenlit and is now listed in the Steam store. For the latest information, purchase options, and discussions for Gangs of Space, please see it on the Steam Store or in the Steam Community.
Visit Store Page
For more details Visit Community Hub
For latest discussions
If you really, really want to, you can continue to the Greenlight page. Information on this page may be out of date, since all the action has moved to the areas noted above.