Store Page
Democracy 4 >  Workshop > feelinWitchy's Workshop
This item has been removed from the community because it violates Steam Community & Content Guidelines. It is only visible to you. If you believe your item has been removed by mistake, please contact Steam Support.
This item is incompatible with Democracy 4. Please see the instructions page for reasons why this item might not work within Democracy 4.
Current visibility: Hidden
This item will only be visible to you, admins, and anyone marked as a creator.
Current visibility: Friends-only
This item will only be visible in searches to you, your friends, and admins. 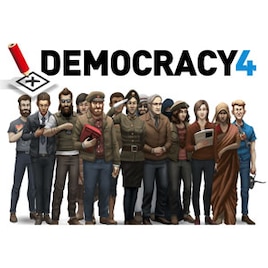 feelinWitchy
Offline
See all 11 collections (some may be hidden)

This item has been added to your Subscriptions. Some games will require you to relaunch them before the item will be downloaded.
Description
Newest Mod: Voting Systems+
MOD UPDATE
Recently I switched computers and due to file locations getting all screwed up, I have been experiencing difficulties with updating this mod. While I am working on solving the problem and getting to the point where I can update it again, I am going to be performing some rebalancing as well as adding additional content to flesh out systems that I had created previously (such as the "Global Influence" mechanic or the international conflict system).
Check out a sneak peek of some of the new content here![imgur.com]
As a result of working as a counselor for people with serious and persistent mental illness, I often come home with an amount of energy that can only push me far enough to eat some Taco Bell and watch a horror movie. This update will definitely be released at some point, but I have a high standard of quality and want to ensure that it lives up to it. Please bear with me so that I can release the most badass mod that I'm capable of <3
Until then, I'll try to release occasional mods to either test a new mechanic or add to a new DLC. This mod will also stay up for use in case you do want to use it. Keep in mind, there will likely be some jenk due to not being updated in-line with the current version of the game.
Thank you for all your support and your understanding on why these updates are taking so long! This is a great community to be a part of.
Popular Discussions View All (4)

Adeptus Freemanicus Jul 20 @ 11:29am
Nope, when you sub to any mod on the workshop it will be in your steam folder, don't use a downloader tool for that, it could give you viruses too.

Blobberu Jul 20 @ 3:48am
@feelinwitchy You can recover the files by downloading your own mod using a workshop downloader tool on the internet so you wont have to remake anything

Kitts Jul 10 @ 9:38am
I'm glad to see you're back, well and still holding much ambition for this mod. And I have family who also work in the mental healthcare field so I'm familiar with how tiring it can be.

feelinWitchy  [author] Jul 9 @ 10:19pm
@Kitts I do hope to get to back to this eventually, and have begun to tinker around with the modding system again to see what I can do and also check out what improvements the creator has added since I was last active. Due to some computer issues, I have lost the ability to update this version of the mod and will have to remake much of it more files I have stored locally. I'm taking this as an opportunity to revisit the balance of the mod as a whole, and I'm trying to utilize real-world statistics more than I did initially (most of these values were informed purely by opinion, lol).
However, I wouldn't expect an update anytime soon. It could be a couple months, or it could be a year. I work as a counselor in the intensive care portion of the mental healthcare field, so any time spent on modding is totally dependent on having energy when I get home from the job. I appreciate your concern, and I promise that the mod will get a sizable content update at some point in the future :)

Adeptus Freemanicus Jul 1 @ 7:25pm
(IMPORTANT) Since a few more languages have been added the mod will crash, so either pick supported languages (English, German, and Spanish) or sub to my adopted version https://steamcommunity.com/sharedfiles/filedetails/?id=2829067248 .

Kitts Jul 1 @ 6:28pm
Thank you for catching me up, and I agree that I have hope that things go well for them.

Adeptus Freemanicus Jul 1 @ 6:23pm
The creator is busy with many things, I don't know everything but they had to work on those instead of the mod, they didn't say when they will return but they will (hopefully) at some point.

Kitts Jun 10 @ 9:47pm
Mjb has some great subjection, I agree. but not to bog you down with everything, are you alright witchy? I know you said that you're having a lot of trouble updating the mod and said something on the lines of might needing to remake it, so I was wondering how that was going and just in general if you're doing well.