Greenlight > Games > Doomgriever's Workshop
Greenlight is being retired. For more information on how to submit games to steam, refer to this blog post.
This item has been removed from the community because it violates Steam Community & Content Guidelines. It is only visible to you. If you believe your item has been removed by mistake, please contact Steam Support.
This item is incompatible with Greenlight. Please see the instructions page for reasons why this item might not work within Greenlight.
Current visibility: Hidden
This item will only be visible to you, admins, and anyone marked as a creator.
Current visibility: Friends-only
This item will only be visible in searches to you, your friends, and admins.
Koala Kids
Description Discussions2 Announcements4 Comments159 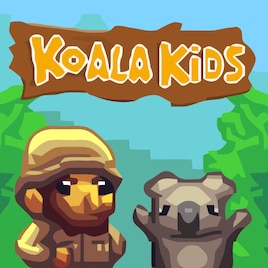 Doomgriever
Offline
See all 18 collections (some may be hidden)

View Koala Kids in the store

Play though the Story Mode alone or with a friend! (Hotseat COOP)
You can also build your own levels with the Editor! \o /

(Adobe AIR no longer support Linux, so a Linux release might not be possible atm :( )

The game is released on Desura!
http://www.desura.com/games/koala-kids
Popular Discussions View All (2)

Doomgriever  [author] Jun 23, 2015 @ 11:40am
@eklig Thanx :) If you have bought it previously in bundle or desura I can spare a steam key. send me a mail at support@doomsterentertainment.com and I'll sort it out!

eklig Jun 23, 2015 @ 11:06am
I've bought the game eariler in a bundle with just a desura key. Do I have to rebuy the game again to get on Steam, or will I get a steamkey? Congrats on releasing the game. Have been looking forward to it. :>

Koala Kids has been Greenlit and is now listed in the Steam store. For the latest information, purchase options, and discussions for Koala Kids, please see it on the Steam Store or in the Steam Community.
Visit Store Page
For more details Visit Community Hub
For latest discussions
If you really, really want to, you can continue to the Greenlight page. Information on this page may be out of date, since all the action has moved to the areas noted above.