Store Page
Left 4 Dead 2>  Workshop > 8sianDude's Workshop
This item has been removed from the community because it violates Steam Community & Content Guidelines. It is only visible to you. If you believe your item has been removed by mistake, please contact Steam Support.
This item is incompatible with Left 4 Dead 2. Please see the instructions page for reasons why this item might not work within Left 4 Dead 2.
Current visibility: Hidden
This item will only be visible to you, admins, and anyone marked as a creator.
Current visibility: Friends-only
This item will only be visible in searches to you, your friends, and admins. 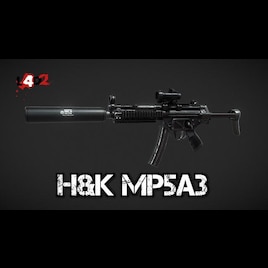 This item has been added to your Subscriptions. Some games will require you to relaunch them before the item will be downloaded.
In 1 collection by 8sianDude
8sian's Apocalyptic Survival Kits for L4D2

This is my poor attempt at replicating the same modified MP5A3 used by Alejandro in Sicario (2015) during the border ambush scene. Albeit, the MP5 used in the film had a KAC sight rail mount instead of a HK mount, and used a CompM2 instead of a CompM4. MP5 model ported from this KF2 Gmod prop pack.

A post-WW2 German sub-machine gun manufactured by Heckler & Koch, the 9mm MP5 is an iconic firearm made famous through it's usage by British SAS operatives during the 1980 London siege, and popularised in pop culture through video games and movies. Although efforts were made to replace the MP5 with a slightly lighter and cheaper alternative, the MP5 still remained as many operative's weapon of choice with dozens of variants produced to suit different operation roles.

teaap Aug 20 @ 11:13pm
Do you mind if I port this gun over to gmod? I'll make sure to give full credit and a link to this mod in the description.

砯墨ポイントれった Jul 12 @ 4:53am
hello，author，cloud I borrow this model and revise texture to anime ?