Greenlight > Games > Made With Monster Love's Workshop
Greenlight is being retired. For more information on how to submit games to steam, refer to this blog post.
This item has been removed from the community because it violates Steam Community & Content Guidelines. It is only visible to you. If you believe your item has been removed by mistake, please contact Steam Support.
This item is incompatible with Greenlight. Please see the instructions page for reasons why this item might not work within Greenlight.
Current visibility: Hidden
This item will only be visible to you, admins, and anyone marked as a creator.
Current visibility: Friends-only
This item will only be visible in searches to you, your friends, and admins.
Cadence
Description Discussions2 Announcements7 Comments267 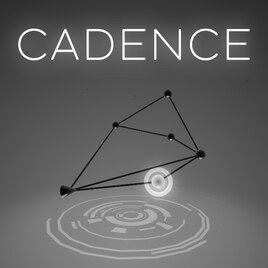 What a journey it's been since Cadence first appeared on Greenlight two years ago. There have been setbacks and disappointments, but Cadence is much stronger for it.

Feel free to check it out and add it to your wishlists: http://store.steampowered.com/app/362800

It's been a while since we've posted an announcement here, but this is probably the most important news we’ve had to share with you in a while: our new Kickstarter campaign (https://www.kickstarter.com/projects/947738574/cadence ).

The Cadence project has been through a whirlwind of exciting possibilities and indie experiences since we last posted (multiple projects, eating strange food and careful conservation of resources -- check out our words on www.madewithmonsterlove.com for more on that!) and we’ve been eking out what we can in a part-time environment for the past few months while building up more contacts in the business.

But despite our intentions to stay on hiatus for a while, opportunity came a-knocking rather firmly. Building on the momentum of game festivals like AMAZE Johannesburg and rAge, we’ve managed to secure some very exciting attention from events like Rezzed (where we now feature in the Leftfield Collection – that’s good news for Londoners wanting to see the game!) and perhaps most excitingly, we’re involved in this year’s SXSW as an audio finalist. In less than a day, Peter will be hopping onto a plane and travelling to America for this and GDC.

Exciting times. And we’re not sure when we’ll find a better moment to launch the KS campaign.
Over the next month – over the next few days in particular – your likes, shares and support will be critical in enacting exactly what you wanted to achieve when you originally supported us on Greenlight – the eventual completion and release of a unique audio generation game.

Even before backing us directly, you can still help us in a way that means a LOT. Sharing, telling your friends, just making them aware of the Kickstarter’s existence in this critical time frame can make the difference between a failed campaign and a fully-funded project that we can work on full time until completion. And a completed project would carry all of the indie pazzaz and musical wonder that we can squeeze out of this money injection.

Hullabaloo on Google Plus: https://plus.google.com/+Madewithmonsterlove/posts/eMQQqLsC52R

Or, of course, you can just link to the Kickstarter page directly: https://www.kickstarter.com/projects/947738574/cadence

Are you a Redditor? Member of a specialist forum? Existing somewhere we haven’t impacted yet? Those locations are the most valuable of all, and giving us a post there would mean the world.

Thanks again for the support, folks! Our early successes have given us the confidence to continue now, and as crazy and sleepless and exciting as the next few months are going to be, we’re really looking forward to all of it!

More than just a sound toy, the game is built on connections between logical nodes that create loops of music. Puzzles demand careful thought and can be solved in multiple ways, generating unique melodies from real-time synthesisers.

All of these solutions can be personalised in an intuitive environment inspired by audio creation tools, allowing players to compose rich music that holds meaning outside Cadence itself.

To find out more or to try a demo of the game, head to
http://www.madewithmonsterlove.com

FAQ:
Q: Level Editor?
Cadence has been built from day one with a level editor in mind - as we'd love to see what musically creative things you guys can come up with. But there's one problem: the budget for this game might run out before we get there - and being indie there never was much budget to begin with! So we might have to do something creative, like save the level editor for the first post-release update, or sell a kidney, or something...

Q: Will Cadence only be English and not other languages?
I want everyone to enjoy this game, no matter what language you speak. Right now the demo uses english, but we're going to try very hard to make the final version with as little language as possible so that you don't need to speak English to enjoy Cadence.

Q: Linux?
A: We think Linux gaming is going to become very significant, especially with SteamOS on the horizon. And normally Unity makes this straightforward.

However the possibility of supporting Linux depends on the audio engine we decide to implement, which may be 3rd party and therefore make Linux support non-trivial. As a two-person development team we think it's important to concentrate our efforts and make the game we know we can deliver well. Making technology choices that exclude particular platforms is not one we take lightly, but you can be sure that if we go down this road it will be because we believe there is no other way (within the capabilities of our resources) to deliver a game that reaches its full potential. It's a tough one but we hope you guys understand ;)

Made With Monster Love Picks
While we have your eyes, here are a couple of games we think are worth your time:

Flarefin Mar 13, 2018 @ 5:35pm
I really think this game has lots of potential, and I hope it comes to Steam soon! I love music, and this game seems like it will be fun to work with! :D

Made With Monster Love  [author] Jan 5, 2016 @ 1:54am
@Psych This game is absolutely still in active development! :) It's come a hell of a long way since the greenlight campaign - keep your eye on Steam Early Access in the near future or follow our twitter account @LovingMonsters for launch news details.