Store Page
Arma 3 >  Workshop > WebKnight's Workshop
This item has been removed from the community because it violates Steam Community & Content Guidelines. It is only visible to you. If you believe your item has been removed by mistake, please contact Steam Support.
This item is incompatible with Arma 3. Please see the instructions page for reasons why this item might not work within Arma 3.
Current visibility: Hidden
This item will only be visible to you, admins, and anyone marked as a creator.
Current visibility: Friends-only
This item will only be visible in searches to you, your friends, and admins. 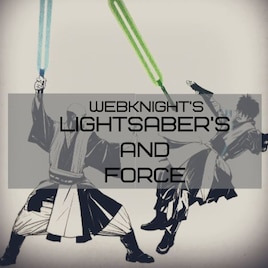 WebKnight
Offline
See all 901 collections (some may be hidden)

This item has been added to your Subscriptions. Some games will require you to relaunch them before the item will be downloaded.
Description
Experience the real power of the force and lightsaber combat with this expansion of the original Improved Melee System.
What this mod add?
Sounds, weapons and mechanics.
The uniforms on pictures is from Opposition mod and private mod of my friend (Do not ask me to upload this one.)

Lightsabers
Compatibility
Mod compatible with ACE.
Compatibility with Opposition and other mods will be released soon.

You want to know how to create your own lightsaber? Concider joining my discrod, i made a special wiki for that.
https://discord.gg/UJfDvdyr7w

If you like what i am doing please join one of the patrons! You will get access to my newest mods and major updates:
https://www.patreon.com/webknightsworkshop

May The Force Be With You!
Senator Armstrong

Nimbus Jun 27 @ 7:34am
How to Force Jump? If have set the Keybindings. and add 1 Cybercristal 1 JediMaster Cybercrystal as well as the cybercrystals for several the forcepowers to my inventory. But nothing happend if press the Key i set. (cybercrystals force jump didnt exist.for some reason)

Cap.exe May 31 @ 12:41am
quick question with the fight styles I am confused on how to work them. I know pressing shift 7 gets into the style but then what?

-Banana- May 24 @ 1:38pm
custom animations are not working they just have pistol animations does anyone have an idea?

Harry Cockler May 7 @ 12:27am
Why can't I find any other crystals than the Cybercrystal?

za0 May 6 @ 9:28pm
Would be very cool a patch to include force abilities in melee weapons from other mods!
Nice work btw!!

KickAceGuy Apr 10 @ 7:21pm
I've got ACE running but even after lighting up an enemy AI jedi with about 20 tanks, numerous infantry and 230mm howitzer ordnance the jedi does not go down. Is there some setting I need to change in ACE or this mod to get it to work?
< >