Store Page
Stellaris>  Workshop > AngleWyrm's Workshop
This item has been removed from the community because it violates Steam Community & Content Guidelines. It is only visible to you. If you believe your item has been removed by mistake, please contact Steam Support.
This item is incompatible with Stellaris. Please see the instructions page for reasons why this item might not work within Stellaris.
Current visibility: Hidden
This item will only be visible to you, admins, and anyone marked as a creator.
Current visibility: Friends-only
This item will only be visible in searches to you, your friends, and admins. 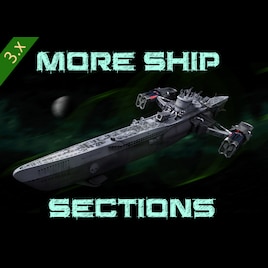 AngleWyrm
Offline
See all 321 collections (some may be hidden)

This item has been added to your Subscriptions. Some games will require you to relaunch them before the item will be downloaded.
Description
Did you just get fighter tech, but cruisers are still a long way off? Or railguns but the generators aren't yet big enough to power that destroyer gunship?

We've got a solution for you! This mod adds several new ship sections to address those problems and more:

AI preferences included.
Not Achievements compatible, as it changes gameplay by adding new ship sections.
NSC2 compatible; there are a couple similar hull sections, and you can pick whichever you like.
Design philosophy: 1 spinal = 2 large = 4 medium = 8 small = 16 point defense

You can participate by voting your opinions in the Polls

azure_wolf_22 Oct 7 @ 8:55pm
perhapse the next best thing since NSC2 has gone belly-up. Thank you for your dedication, as it seems such a thing is a dying art

Biały Chomik Oct 1 @ 4:44am
I downloaded this mod only for the cool look of that third battleship front section but it won t show up, any ideas why?

Недовольный котя Jun 6 @ 9:26am
For some reason Dedicated Broadside, Close Quarters and Missile Array bows looks like Broadside bow, not how they look on screenshots.

AngleWyrm  [author] May 24 @ 1:17am
The size (and thus the power) of hangers was chosen by the community to be worth one medium weapon slot. Currently the votes stand at about 2/3 for Medium and 1/3 for Large.

You are welcome to add your vote to the general consensus [www.strawpoll.me]

erik.vale May 23 @ 4:20am
Hey, just noting that Hanger Corveties are rediculously op, particularly if combined with NSC computers to make them hang back. (I would say you can't balance for every mod, but you mention this one explicitly). It might be worth removing the picket mount on them, so that other ships have a chance of touching them with missiles at least.

AstartesFanboy Apr 28 @ 8:48pm
hey is it possible to have the turrets show up? Cause as of now they dont
< >