Store Page
RPG Maker VX Ace>  Workshop > mtarzaim's Workshop
This item has been removed from the community because it violates Steam Community & Content Guidelines. It is only visible to you. If you believe your item has been removed by mistake, please contact Steam Support.
This item is incompatible with RPG Maker VX Ace. Please see the instructions page for reasons why this item might not work within RPG Maker VX Ace.
Current visibility: Hidden
This item will only be visible to you, admins, and anyone marked as a creator.
Current visibility: Friends-only
This item will only be visible in searches to you, your friends, and admins. 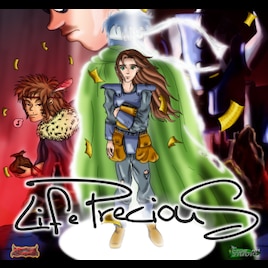 mtarzaim
Offline
See the collection (may be hidden)

This item has been added to your Subscriptions. Some games will require you to relaunch them before the item will be downloaded.
Description
Somewhere in the universe.
Somewhen in the future.

On the planet Aremis, at a period similar to the end of our 19th century, the adventuring rush has seized the world.
Many millionnaires, looking for fame and knowledge, set up expeditions to all continents.
The one called Demeris notably, which wealthness is on par to the eagerness of its people to protect it, draws inexorably scientists and adventurers in.

Jones Esterlan was one of them. Like few, only the unknown and its thrills was his objective. Like most, he never came back.
Today his daughter, Lilaverna Esterlan, travels to that very same land of many dangers.
Like her father, she isn't looking for treasures. She aims for something even more precious.
So precious her father chose it over her, over his family, and over his very own life.
She doesn't know what it could be. But she will find it.
This treasure of a lifetime.

Life Precious is an adventure/action game, made with RM VX ACE Lite.
The goal was to produce a decent game with a limited version of RM and free tools.
It features dual language (english/french), several minigames, five dungeons to explore and various endings depending of the time used by the player to complete the game, and the wealth gained.
Its playtime is around one hour. There's a walkthrough within the game's directory.