Store Page
Stellaris>  Workshop > MrFreake_PDX's Workshop
This item has been removed from the community because it violates Steam Community & Content Guidelines. It is only visible to you. If you believe your item has been removed by mistake, please contact Steam Support.
This item is incompatible with Stellaris. Please see the instructions page for reasons why this item might not work within Stellaris.
Current visibility: Hidden
This item will only be visible to you, admins, and anyone marked as a creator.
Current visibility: Friends-only
This item will only be visible in searches to you, your friends, and admins. 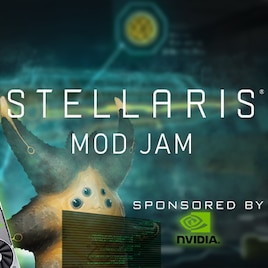 MrFreake_PDX
Offline
See all 797 collections (some may be hidden)

This item has been added to your Subscriptions. Some games will require you to relaunch them before the item will be downloaded.
Description
#MODJAM2020 is brought to you by Paradox Interactive and NVIDIA and is now available!
Found a bug? Report it here:
https://forum.paradoxplaza.com/forum/threads/modjam2020-bug-reporting-thread.1449518/

Explore 15 unique Origins created by members of the Stellaris Modding Community, and vote for your favourites! Start on a Shielded world, influence other empires from Behind the Scenes, search for a new home after your Narrow Escape, and many more!

The Origins:
Shielded: "This civilization developed under the protection of an ancient planetary shield, named the Veil by the population. With the shield fading, it is now free to explore the galaxy."
by Akeean

Ancient Juggernaut: "Eons before this civilization developed the ability to reach the stars, a long-forgotten and damaged Juggernaut has remained idle, adrift in their solar system."
by jasonpepe

Fleet Overlords: "Instead of being a single civilization, it is rather an assembly of dependent species and races, once unified and kept by the force of the mighty Fleet. With time, the Fleet had crystallized into a unique multispecies political and military structure, ruling the entire federation. It doesn't own or manage any planet itself, but receives all necessary resources, ships and manpower from controlled planets to keep this union under tight control."
by iyur

Subterranean: "This civilization makes use of extensive natural and artificial subterranean caverns that provide powerful habitation, research, and defensive bonuses."
by Omega

Absolute Zero: "A neighbouring highly advanced empire sent a cache to our homeworld that had a mysterious timer elapsing on it. As generations passed, the yet primitive empire could not access the cache but studying it in the hopes of releasing the locked pandora's box."
by RegiZero

Factory Automation: "Ever since the Industrial Revolution, this species has been obsessed with increasing automation in their factories. Achieving fully automatic factories, in operation and expansion, has allowed them to greatly reduce the labour required by their species, and catapult themselves to spacefaring before the expected population levels."
by James Fire

Behind the Scenes: "This civilization continuously pushes the boundaries of an existence punctuated by betrayal, assassination, calculated scheming, and treacherous acts of manipulation."
by Complex

The Caretaker: "In the distant past, this civilization was cursed with sterility. In response to a rapidly shrinking population, the wisest of this civilization's ancestors created a vast device, The Caretaker, designed to provide them with offspring. Over centuries, this civilization has become more and more dependent on their Caretaker, and now the Caretaker has gifted them with the means to expand into the stars. But it has made a rare request of its wards - that it may expand with them, to continue to care for them wherever they may go."
by AlphaAsh, NHunter, Rough, GwenBlanketKnight

Lost Spawn: "This civilization is the creation of a spaceborne entity, guiding their growth and evolution from the stars. During their development their creator abandoned them, but through legends and tales, the story of their creation lived on. Now with the far reaches of space within their grasp, they seek answers among the cosmos."
by Lerahk

Paradigm Shift: "This civilization was created by an old empire in the hope of breaking its stalemate with its ancient enemy."
by Erdnuss

Stellar Pioneers: "This civilization tried to colonize its closest systems before the advent of faster than light travel. Now with the discovery of the Hyperspace Network, they seek to discover what happened to their earlier colonization attempts."
by Amoren

A Second Dawn: "This civilization developed, somehow, in a strange world, where organic and synthetic lifeforms coexist. Unaware of their true past, they now seek a light for guiding their path in an endless and dark universe full of secrets and mysteries to solve."
by Rodahtnov, OldEnt

Freebooters: "A loose band of mercenaries and privateers who are rather lawless and enjoy a decadent lifestyle when they are not causing trouble."
by NSC2 Team

Containment Failure: "This civilization has been locked on its homeworld for millennia by eight moons emitting a strange and powerful energy field preventing their escape. Only recently have they had a chance to start expanding again when one of the 8 molten moons mysteriously cooled down.."
by Guilliman

Narrow Escape: "This civilization has had a slight headstart in discovering FTL technology. Unfortunately, with the discovery of FTL technology has also come the discovery of an imminent disaster on their homeworld. With the cause and reason unknown, all attempts to prevent it have failed. As a last-ditch effort, they have scavenged the planet for all the resources it contained and evacuated all pops from the planet onto several colony ships, in search of a new habitable planet."
by McAwesome