Store Page
Crusader Kings III >  Workshop > Tobbzn's Workshop
This item has been removed from the community because it violates Steam Community & Content Guidelines. It is only visible to you. If you believe your item has been removed by mistake, please contact Steam Support.
This item is incompatible with Crusader Kings III. Please see the instructions page for reasons why this item might not work within Crusader Kings III.
Current visibility: Hidden
This item will only be visible to you, admins, and anyone marked as a creator.
Current visibility: Friends-only
This item will only be visible in searches to you, your friends, and admins. 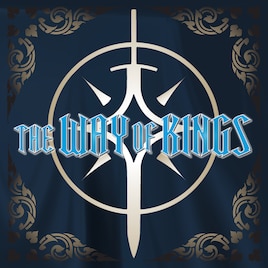 Tobbzn
Offline
See all 158 collections (some may be hidden)

This item has been added to your Subscriptions. Some games will require you to relaunch them before the item will be downloaded.
Description
UPDATED AND COMPATIBLE WITH FRIENDS AND FOES!

Speak again the hallowed oaths;
Life before death. Strength before weakness. Journey before destination.
The Knights Radiant must stand again.

What is Way of Kings?
Way of Kings (WoK) is to Brandon Sanderson's Stormlight Archive what A Game of Thrones is to George R.R. Martin's A Song of Ice and Fire, and this mod changes the setting to the world of Roshar. The mod implements new stuff for all vanilla features, and also has brand new features like artifacts, books, magic, dungeon delving, and a brand new economic resource: Investiture!

Originally posted by a darkeyed youth of unknown origin, 15 seconds pre-death:
I have seen the end, and have heard it named. The Night of Sorrows, the True Desolation. The Everstorm.

The world of Roshar is regularly swept by massive, magical storms that have fundamentally changed the geography and ecology of the planet. Humans exist, but they are far from alone on the planet, and most animals are crustaceans, ranging from insect-like to humanoid to greatshelled chulls and chasmfiends.
Massive, magical weapons called Shardblades can turn individuals into near-unstoppable fighters, and the struggle over influence, shards and gemstones has become the real war. Looming over these events are signs of a much greater threat, where magic may return to the world after thousands of years, and the Knights Radiant may rise again to defend... or destroy it.

Originally posted by an Azish itinerant worker, 8 seconds pre-death:
They named it the Final Desolation, but they lied. Our gods lied. Oh, how they lied. The Everstorm comes. I hear its whispers, see its stormwall, know its heart.

FAQ
Will this mod spoil the books/Do I need to have read the books to enjoy this mod?
The mod is designed more as a sandbox than as a strict narrative, so that depends on how sensitive you are to worldbuilding spoilers. The vast majority of plot-relevant events that could happen in the mod can also go in wildly different directions than in canon. If you haven't read the books, then you don't really know whether or not any given outcome is what happens in the book or not, you just know that the world is set up in a way such that what you experienced could realistically happen.

Features
Cartography
o The Highstorm crashes across the map at regular intervals.
o New terrain types created to fit the Rosharan world - it certainly matters whether a castle in the mountains is exposed to the east or sheltered to the west.
o Custom shaders for deep chasms in the terrain of the Shattered Plains.

Governments
o New Highprince, Bureaucracy and Luminocracy Governments with vastly different playstyles and unique features.
o Highprinces favor Warfare, Bureaucracies favor law and can file lawsuits over claims instead of waging war, and Luminocracies unlock the endgame goal for Radiants: Restoring the Oathpact and driving the forces of the Void off the planet!
o Thaylen Elective: Favoring those with the ability to manage an economy.
o Azish Elective: Anyone can submit essays, and the outcome depends on your stats and a bit of randomness.
o Babath Elective: Favoring the Eldest.
o Discrimination based on species, eyecolor, and literacy. 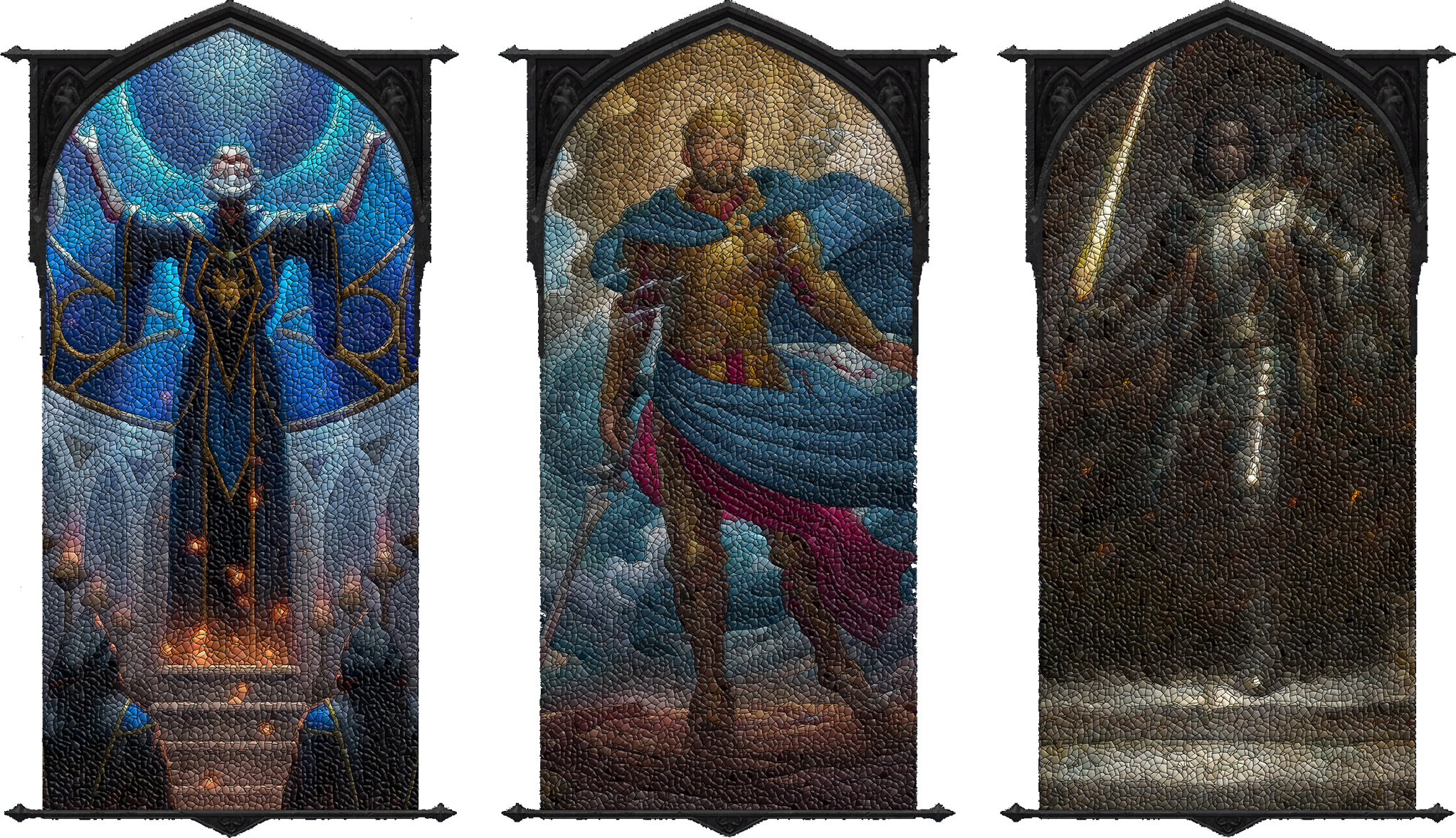 Magic system
o After a stress break, characters with the appropriate personality may bond a Spren and become Radiant. Each of the Ten Radiant Orders is highly personalized - each playthrough will be vastly different!
o Radiants can swear ideals, heal from wounds, gain shards, and perform surgebinding.
o Investiture is a new geopolitical resource, on the same level as prestige and piety. Investiture must be stored in gemstones, and therefore cannot exceed your wealth.
o Radiant Culture Heads can research unique Radiant Innovations. Once all orders have been researched, you unlock the powerful Luminocracy Government type!
o The Unmade will periodically haunt various regions, driving inhabitants to war or uncontrollable feasting. Unless they can be captured and eliminated... 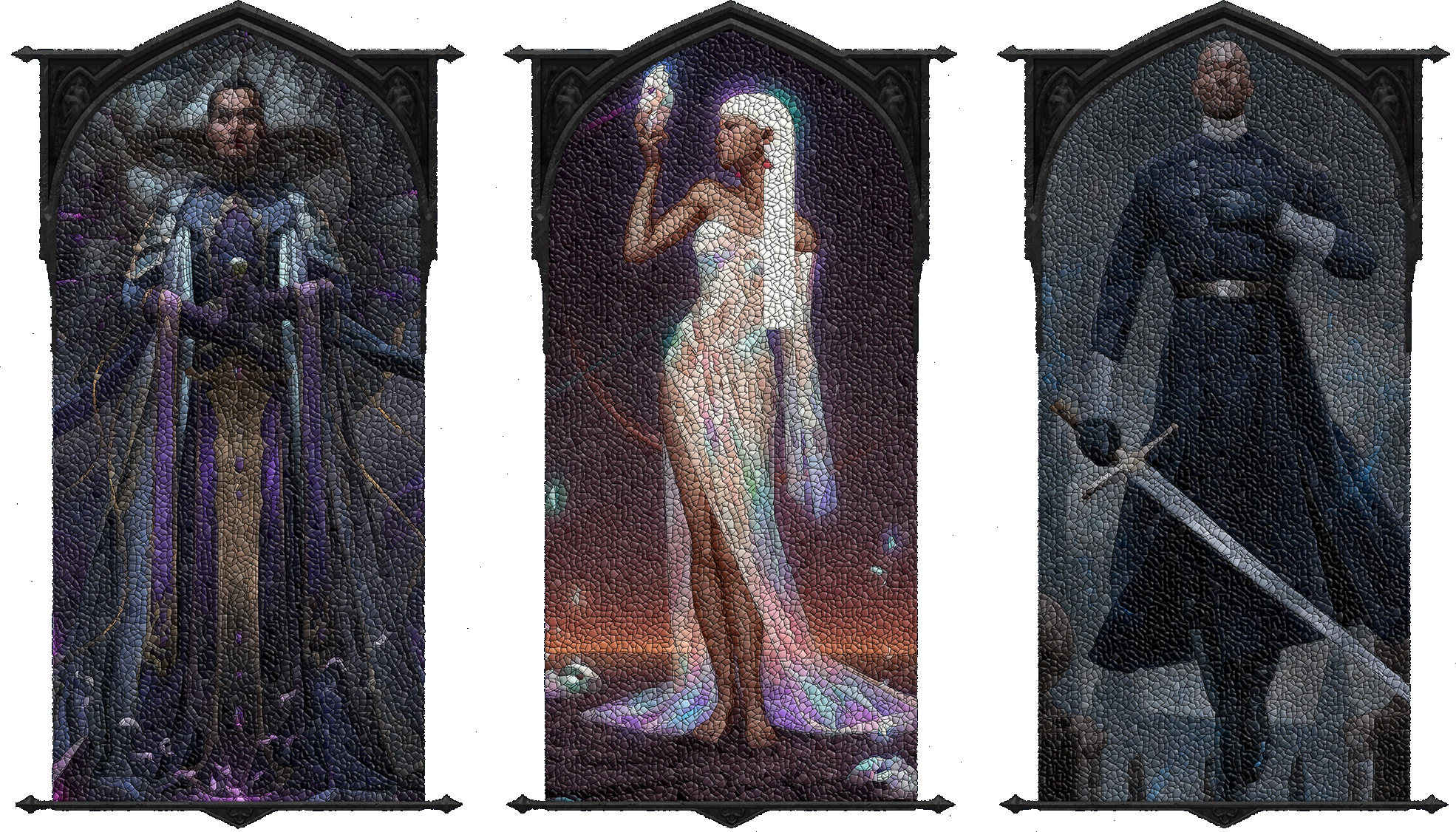 Artifact system
o The old Way of Kings artifact system has been moved to the official Artifact system introduced in the Royal Court DLC, but is available regardless of whether you own said DLC.
o Shardblades, Shardplates, fabrials, and oh my! Is that Nightblood?
o Majestic artifacts may be crafted by any ruler of sufficient fame level, but to craft magical fabrials you need the Artifabrian lifestyle perk.
o Famous books may be read by the literate. Illiterate characters may still leaf through their books, but the text will be written in the Women's Script.
o You can challenge other characters to duels over prestige, artifacts, or land. 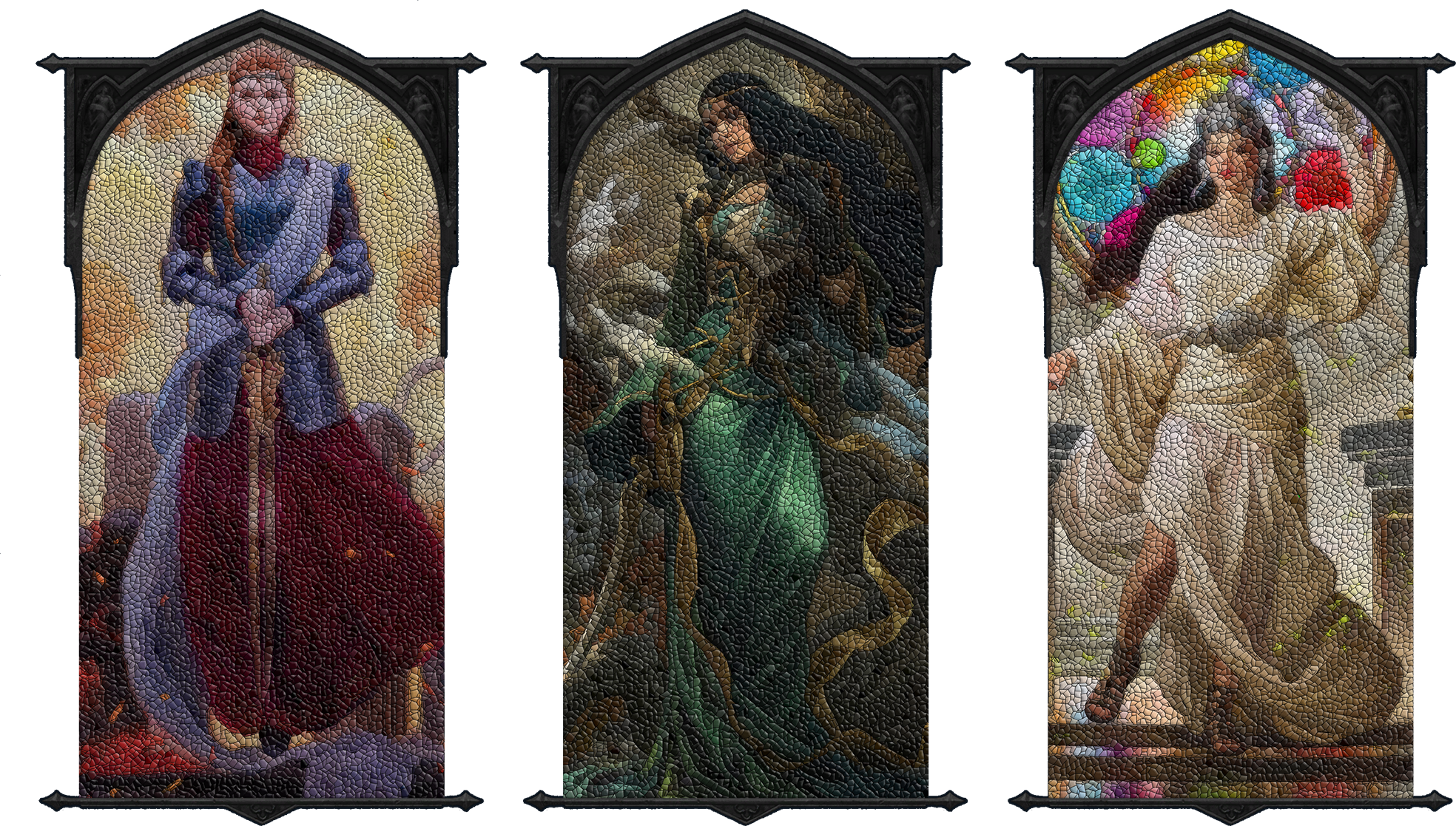 Art
o Eyecolor, spren bond, and species affect your character model.
o Custom men-at-arms.
o Some holdings have special models.
o The Highstorm is on a custom map layer, rendering even at distant zoom levels so you can witness the absolute unit of a storm.
o Music by The Darkeyed Musician ( www.thedarkeyedmusician.com/ )

Originally posted by a lighteyed child of five years, 45 seconds pre-death. Diction improved remarkably when giving sample:
Above the final void I hang, friends behind, friends before. The feast I must drink clings to their faces, and the words I must speak spark in my mind. The old oaths will be spoken anew.

How to help us
We are looking for interested cartographers, artists and writers to grow our team and help us implement our vision of Roshar in CK3. If you want to contribute, come join our Discord at https://discord.gg/bYhScktJEv

Special credits:
Terrapass, for his ultra shader jank!
The Darkeyed Musician ( www.thedarkeyedmusician.com/ ) for providing the main menu theme, Song of Secrets!
Castox, for the main menu and making the Book Resource available to all modders!
Buckzor, for providing access to his retired CK2 project files (Heightmap and terrain masks)
The CK3 Modding Coop for their assistance in helping us find our way among the files.
Owlcoholic's BLANKMAP, for providing a testing ground that taught us to mod and eventually turned into this mod.
Saša Radivojević ( www.instagram.com/art_of_sasha_r/ ) for providing beautiful panoramic art!
Omar Seitisleam https://www.instagram.com/omar.seitisleam/ for an awesome loading screen!
Figgo (@Figgorine) for providing the Tai-Na holding art!
Bren Saxton for an amazing loading screen!
coppermind.net for being the greatest wiki in the world of fandoms, whence many of our Game Concepts come!
Brandon Sanderson, the author of the The Way of Kings, The Stormlight Archive, and the Cosmere in general. We are not officially associated with him in any way, and he owns every right to his own intellectual property.
Brandon Sanderson's official artists: Isaac Stewart, Ben McSweeney, Steve Argyle, and Michael Whelan, whose official artworks have been transformed and adapted for placeholder bookmarks and loading screens, until our own artists finish their work on replacement images.
Popular Discussions View All (22)

asadoldman Dec 4 @ 12:41pm
@Sleeclow, you might have found the answer already, but you need a high stress level before you go on a pilgrimage. 200 or more stress will have the option pop up as one of the destinations for a pilgrimage.

Tobbzn  [author] Dec 3 @ 3:54am
You probably have some traits that disable spren bonds, or you have high tyranny or some such.

hms3937 Dec 2 @ 11:03pm
how do i become a radiant if i am a customizd character i never see the option to seek spren aid

Cyrus the Great Nov 1 @ 4:10pm
I believe in this mod you can read a book as well but I'm not sure (I refer to the cartography in the images with the text of introduction and then the proceeding no of chapters)

Tobbzn  [author] Oct 25 @ 4:46pm
If/when I get my hands on some Aimian character models, I'll make the Siah playable.

Kungen32 Oct 10 @ 11:01am
There seems to be a distinct lack of economy buildings, have they been removed in the mod or has there been a recent change in the base game?

Trying to play Sebarial and none of his directly controlled countys have a single possible economy building.