Greenlight > Games > 14 Hours Productions's Workshop
Greenlight is being retired. For more information on how to submit games to steam, refer to this blog post.
This item has been removed from the community because it violates Steam Community & Content Guidelines. It is only visible to you. If you believe your item has been removed by mistake, please contact Steam Support.
This item is incompatible with Greenlight. Please see the instructions page for reasons why this item might not work within Greenlight.
Current visibility: Hidden
This item will only be visible to you, admins, and anyone marked as a creator.
Current visibility: Friends-only
This item will only be visible in searches to you, your friends, and admins.
Boon Hill
Description Discussions2 Announcements2 Comments137 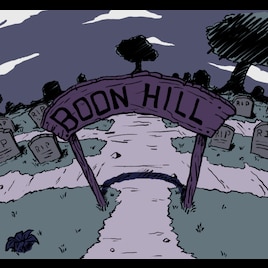 View Boon Hill in the store

Store page
Recent Announcements View All (2)
Whoops. Looks like Boon Hill is up for pre purchase on Steam.
October 29, 2015 - 14 Hours Productions
Boon Hill will be out on the 31st!

Hey everyone that was nice enough to upvote this game. Boon Hill will be out for purchase on Halloween for Steam. I was planning to put it up for presale tonight, but it seems Steam has already done so?

Annoying a bit as I wanted to get a new trailer done before then. Well, it is what it is!

It's late of course but the game exists! Go, pre order it. Get ready to walk around a graveyard and... get exactly the experience promised.

I worked very hard on this game for a long time. I hope anyone that takes the time finds Boon Hill a worthwhile use of their time. May you have some meditation on life among the rows of stone.

Or just enjoy chasing crows you can never catch. Whatever makes you happy inside.

If you're seeing this, you already know this. Kind of a catch 22 situation. Still, it's up here and I would like to thank everyone that has already up voted it and given such kind comments.

For those that voted it down or left less kind comments, thank you as well. Taking the time to look at something like this is appreciated, even if in the end you decided it wasn't for you.

The only real thing of note is a bunch of new pictures were added, some shots from game areas, some concept art. If any of them loaded wonky, look strange or have some horrible mistake in them let me know!

Other than that, thanks again for being here. Having the game on steam would be great, but if it doesn't go thorugh it is still wonderful to see people's interest and get their feedback.

You are all crazy but wonderful people. May you remain above ground for as long as possible.

Read More
Description
What is Boon Hill?
A graveyard simulator, a story of epitaphs, a tale of ghosts that haunt, a game with no goal— all valid descriptions of Boon Hill.

To put it as simply as possible, Boon Hill is a game about reading gravestones. There might be a few other elements and things you can do, but the bulk of the game is just walking through a graveyard, reading epitaphs and thinking about who these people were and never will be again.

it might be hard to imagine why someone would want to play a game about walking through a graveyard. Have you ever done that? Just walked through a graveyard and spent time examining all the different gravestones and what's written there? You should if you haven't.

The gameplay is simple: you move around and examine things. The most obvious things being the headstones, of course. You can also interact with any NPCs you might encounter.

Can You Lose?
The game has no lose scenario either. There is nothing threatening the player. No zombies bursting up from the graves and no vampires hidden deep in the mausoleums. The gravedigger is not digging a grave for you and it's impossible to be buried alive. There's nothing to be afraid of at Boon Hill, except perhaps your own mortality, despite what some NPCs might tell you.

Though they do say you should never fall asleep in a graveyard.

Discover Mystery in the Graveyard
I don't want to imply the game is aimless. Boon Hill is about inferred stories, about the connections people have that continue even after they die. The graveyard tells many tales woven by those who've long since passed on: stories of love, life, sorrow, and joy, told over generations.

The threads of narrative are woven throughout the gravestones for you to discover, if you have the inkling to look. A row of graves all with the same last name, most of them having died very young, suggests a specific set of circumstances. An epitaph that reads 'Survived by no one' is dour, yes, but clearly someone carried out their last wishes. Here, people are tied together by something as simple as similar birth dates, the places they were born or died, and even the styles of their grave markers. Subtle stories abound in the rows of stone.

Fancy, advanced 16-bit graphics! The kind of graphics you drooled over twenty years ago.

The ability to choose your gender as male OR female! How very progressive.

Over one thousand individual graves and epitaphs for you to read! It's the whole point of the game, after all.

Several NPCs to interact with! At least more than two. Talk to them, learn their stories.

Virtual graveyard! Real depression! Feelings of depression are not guaranteed, but reading epitaphs is not known as a heartwarming pastime.

Real-time mourning! You'll be able to bow your head, leave flowers on gravestones, and look sad. All in real time!

Figure out what's up with that weird goth chick! She's kinda creepy.

Lie in an open grave! Haven't you always wanted to do that?

But mostly, Learn about the history of this town and the kind of people that lived there through the legacy they have left behind in the graveyard boon hill.
Popular Discussions View All (2)

Man... I admire your tenacity. Game developpement IS hard, and has your first steps into making a game (I guess), I'm sure that you learned a LOT. It was long, hell yeah, but you never give up.

I hope to find my grave soon!
(And excuse my miserable writing, English is a second language to me)

King of Clones Apr 22, 2015 @ 6:17pm
greetings i have followed this game from the kickstarter and i love the idea. unfortunately i was unable to get in on the kickstarter so when it apeared here and was greelight that was awesome. but its has taken a while and i was wondering if you still plan on releaseing it on steam and if not where else can i get a copy?

14 Hours Productions  [author] Nov 20, 2014 @ 5:02pm
GryFalco, woah! You seem really upset. Which is understandable. But despite the long development time, we are still working on the game. We're hoping to have a web beta for you to play by the end of the weekend. I can see that you're really upset though. And rightfully, the dev cycle has ended up much longer than anyone would like. Sorry to have disappointed you. It was never our intentions.

Though, on the bright side! The game will come out (hopefully soon, but that's been said before). Thanks for your initial support, it was appreciated. The current anger? Less so, but it is understandable where you're coming from.

Falco Nov 7, 2014 @ 2:10pm
The lack of story or graphics wasn't the problem at all, the problem was how he scammed everyone and still never delivered the game. There's absolutely no excuses to take this long for such a simple game.
Estimated delivery: Aug 2013
Don't greenlight this offense for everyone who backed up this project and got scammed.

Void Sep 19, 2014 @ 2:33pm
@GyrFalco you backed a project jet you didn't bother to read about it more carefully ? Wow man. From the start they have been telling people exactly thet it won't have a streightforward story or next gen graphics... you have to look for hints and clues and the graphics are pixeel art.

-=Whitekong=- Sep 17, 2014 @ 2:28am
Death and Romance go hand in hand, that's why I voted for this game. And because of the great creator's insights mentioned in the trailer. "It's about death celebrating life."

Falco Aug 27, 2014 @ 5:07am
I regrettably backed this project on kickstarter and it was funded on may 26th 2013. This game has no story and has worst graphics than rpg maker. Still hasn't been released and I doubt they are putting any effort in it. Just a huge disappointment and scam.

Boon Hill has been Greenlit and is now listed in the Steam store. For the latest information, purchase options, and discussions for Boon Hill, please see it on the Steam Store or in the Steam Community.
Visit Store Page
For more details Visit Community Hub
For latest discussions
If you really, really want to, you can continue to the Greenlight page. Information on this page may be out of date, since all the action has moved to the areas noted above.