Store Page
Garry's Mod >  Workshop > Tyler's Workshop
This item has been removed from the community because it violates Steam Community & Content Guidelines. It is only visible to you. If you believe your item has been removed by mistake, please contact Steam Support.
This item is incompatible with Garry's Mod. Please see the instructions page for reasons why this item might not work within Garry's Mod.
Current visibility: Hidden
This item will only be visible to you, admins, and anyone marked as a creator.
Current visibility: Friends-only
This item will only be visible in searches to you, your friends, and admins. 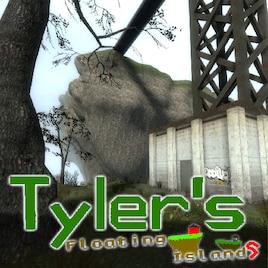 This item has been added to your Subscriptions. Some games will require you to relaunch them before the item will be downloaded.
In 1 collection by Tyler
Tyler's Collection

6 items
Description
A sandbox except it has floating islands and it's definitive!.

From the creation of the vmf file to publishing the finished version to the workshop, it took me about: 4 days, 20 hours, and 44 minutes .

About
gm_floating_island is my second attempt at floating islands. I think I first attempted to make it was after I finished Tyler's Arena. It was supposed to be another deathmatch map except you only use melee weapons. It ended badly since I was new to hammer back then and I didn't have enough experience at the time.

I tried looking for floating island maps on the workshop, barely found any. Looked for tutorials on how to make floating islands, found nothing. After that I just assumed that making floating islands with displacements is something the Hammer Editor can't do or it's nearly impossible. But after learning more about sub-dividing and displacements, I decided to give it another go. Turns out it was MODERATELY easy to do. At first it was one of my many test maps but I ended up expanding it to a sandbox map!

After all this time, I've finally decided to update the map. Now it has 2 helipads, an apartment complex, and a cafeteria. The reason I decided to update it is because I was play the map with some friends and then I had an inspiration to add more to it. So now the map feels complete to me. I'll most likely never add anything else to this. So I would like to thank you for playing!

So what do you think? I would really appreciate you feedback in the comments below!
< >
7 Comments