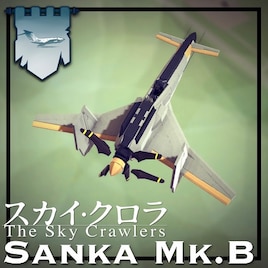 47 items
Description
The Sanka Mk.B is a small single engine fighter that appears in The Sky Crawlers. Built by Rostock Iron Works, it is the company’s main fighter during the events of the film. Like most of Rostocks aircraft, it is in a pusher configuration, and is notable for its superb speed and maneuverability.