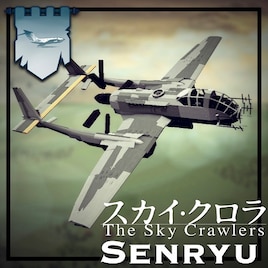 47 items
Description
The Senryu is a single engine pusher aircraft built by Rostock Iron Works that appears in The Sky Crawlers. In general, it is considered a well rounded aircraft. It was initially designed as a fighter, though usually fulfills the role of scout or light bomber. It maintains having two cannons, though it also carries bombs and is heavily armored. It’s high speed combined with its versatile armament make it a jack of all trades. It is noted that in a mock dogfight against a Someaka, it could hold its own against the dedicated fighter.