Store Page
Garry's Mod >  Workshop > LordCthulhu814's Workshop
This item has been removed from the community because it violates Steam Community & Content Guidelines. It is only visible to you. If you believe your item has been removed by mistake, please contact Steam Support.
This item is incompatible with Garry's Mod. Please see the instructions page for reasons why this item might not work within Garry's Mod.
Current visibility: Hidden
This item will only be visible to you, admins, and anyone marked as a creator.
Current visibility: Friends-only
This item will only be visible in searches to you, your friends, and admins. 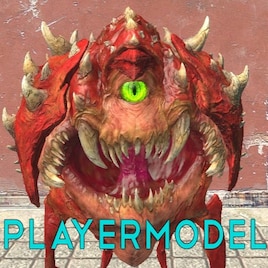 This item has been added to your Subscriptions. Some games will require you to relaunch them before the item will be downloaded.
In 1 collection by LordCthulhu814
Lord Cthulhu's Collection

113 items
Description
Hunters of the Sloughlands, the Cacodemon lurks the bottomless and murky depths of Hell in search of easy prey. An aimless wanderer, the Cacodemon is mostly devoid of cognitive ability, sensory awareness, and otherwise commonly occurring impulses. Driven only by a singular desire to feed, the Cacodemon is likely to appear wherever there is flesh to be consumed, bringing with it an insatiable propensity for hunger. It is said that the Cacodemon bears some resemblance to the cycloptic titans of ancient Hell lore, leading Sentinel scholars to believe that the forgotten titans may yet live on in some disembodied form.

The floating meatball tomato thing with arms from DOOM Eternal, now a Garry's Mod playermodel. Comes with a glow-in-the-dark eyeball.

I DO NOT take requests for ANYTHING. This means playermodels, NPCs, maps, ragdolls, props, etc. Do not add me as a friend solely to ask for anything, either. Any and all requests will be ignored.

I appreciate positive ratings and kind comments, but any sort of constructive criticism is fine too. Hateful comments will be deleted. Also, if you encounter a bug of any sort, please let me know so I can try and fix it.
< >
15 Comments

LordCthulhu814  [author] Aug 27, 2022 @ 11:47pm
@Colin nice to see a good ol' RussianBadger reference. HeavenlyFather (or just Heavenly, as the group calls him) would be the person you're referring to.