Store Page
Left 4 Dead 2>  Workshop > Alex_D_Vasilkov's Workshop
This item has been removed from the community because it violates Steam Community & Content Guidelines. It is only visible to you. If you believe your item has been removed by mistake, please contact Steam Support.
This item is incompatible with Left 4 Dead 2. Please see the instructions page for reasons why this item might not work within Left 4 Dead 2.
Current visibility: Hidden
This item will only be visible to you, admins, and anyone marked as a creator.
Current visibility: Friends-only
This item will only be visible in searches to you, your friends, and admins. 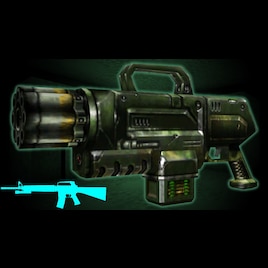 This item has been added to your Subscriptions. Some games will require you to relaunch them before the item will be downloaded.
In 1 collection by Alex_D_Vasilkov
Alex_D's compiles: firearms

Powerful rounds of burning plasma, a high rate of fire, and a vicious secondary attack make the Pulse Blaster a very popular mid-range weapon. The primary fire riddles targets with glowing bursts of plasma; the secondary fire emits a steady stream of the incandescent green substance. The pulse blaster uses cells containing 50 rounds, which must be replaced after they are emptied. The number of rounds remaining in the current cell is displayed on the HUD and there is no secondary attack because this is a different game. These blasters are seemingly rechambered for the dark energy pulse cells used by the Combine, being a rapid-fire instant hit weapon.

Replaces the "M-16 Assault Rifle" (model and sounds)
Not the 2500 Followers Special, it's too bad to qualify. I'll make something simpler for that. Anyway, one of my oldest WiPs, now in a somewhat releasable state, but by no means complete. My second animation set, this time with actual hands, tries to mimic the actual UT anims. Has additional skins for maximum TLS, from the beta version and the 3dfx demo. Also it has a light/laser source and aiming up/down anims, hooray.

Copyright 2020 Alex_D. This item is not authorized for posting on Steam (or anywhere else, unless fully credited), except under the Steam account named Alex_D_Vasilkov.

Alex_D_Vasilkov  [author] Feb 16 @ 11:43pm
You find them if a mapper set a weapon spawn to use Skin 2 or Skin 3. The saferoom after the sugar mill has Skin 2 for the weapons, Bill has the Skin 3 version in The Passing.

Super POSTAL Feb 16 @ 2:16pm
Nobodies saying it should look as good as somebody or anothers animations, it's just very stiff and brings an otherwise good mod down.

Alex_D_Vasilkov  [author] Feb 16 @ 2:07pm
Why, yes, my first animation ever was supposed to be as good as Cele's or iiopn's or else I shouldn't have bothered.

Super POSTAL Feb 16 @ 1:27pm
Hey man, think the mod is pretty cool, it's just too bad the reload animation is total fucking dogshit. Like honestly you did a pretty bad job, and it would probably look better if you just lowered the gun off screen for reload instead of what we got. Keep up the good work.