Sins of a Solar Empire: Rebellion

Installing Mods
By myfist0 and 1 collaborators
Everything you need to know about installing mods for Rebellion.

Where to put the Folder

Comments
Enabled Mods
Full conversion mods may crash the game if enabled and run without first restarting the game. This may be due to the engines 2GB RAM limit. The game has already loaded all the original assets and once it starts to load the mods assets, reaches the 2GB limit and soon crashes. This is easily avoided by restarting the game after you enable a full conversion mod, or editing the EnabledMods.txt manually.

Extracting
Community made mods are shared by uploading a compressed archive to a file hosting service like ModDB or FileFront. Once you have selected and downloaded the mod, it will require a program to open the mod archive for extraction.

Once you are able to open the compressed archive and view the files and folders inside, it is time to find where to place your new mod.

Where to put the Folder
The easiest way to find where to place the mod is through the game menu. Select "Options" in the main menu the select "Mods" then "Show Mod Path". Pressing "Show Mod Path" should create the folder if there is not one already.

Sins Mods are very specific to version and expansion type.
vX.XX is the version of Rebellion. There may be multiple folders for different versions of each upgrade. Place the mod in the most current version folder only if the mod was made for that version. Older version folders or the mods in them are no longer used by the game.

The Mod Tab
The mod tab of the main menu options is where most of the magic happens with enabling mods. 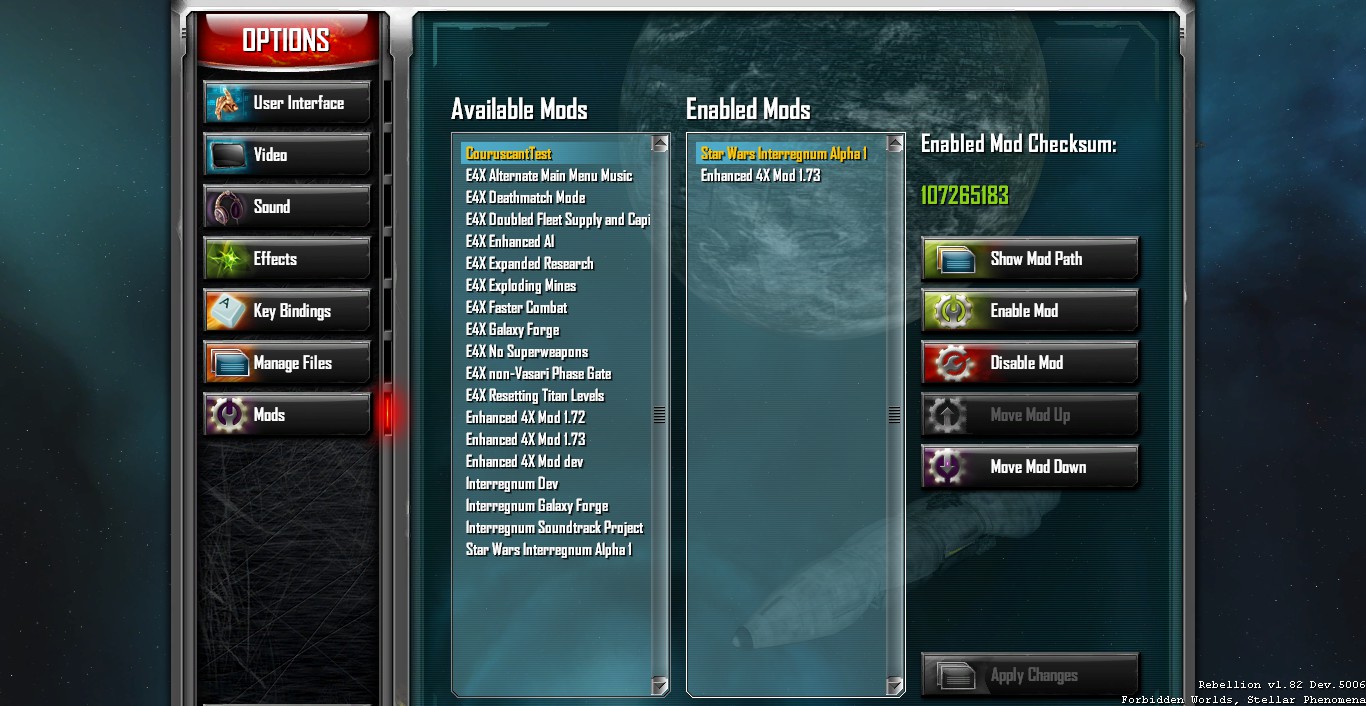 Assuming you've found the correct mod folder in the section above, all the mods the game can find will be listed on the left. Select the mod you want and hit the enable mod button to add it to the enabled mods list on the right.

While the mod has not yet been enabled, you will probably notice a change in the checksum number on the upper right (some purely visual or sound mods may keep a checksum of 0). This number is unqiue for every combination of mods, and is used to determine that two players are running the same mod for multiplayer. If you are having difficulty with any mod, a good first step is to make sure the checksum matches the one from the download page or the readme file.

You may then procede to enable additional mods (more on that in the next section) before hitting the apply changes button. This will cause the game to reload with the mods you enabled activated. Assuming this is successful, your mod will now be loaded. The game will also now load the selected mods when the game starts up.


One word of caution; certain large total conversion mods may crash when you attempt to enable them with the in game mod tab. This is due to a bug in how the game unloads the vanilla resources. For these mods you will need to apply them by editting the Enabled-Mods.txt file found in your mod folder. See the installation instructions of the specific mod for details on how to do this.

The above issue should now be resolved in the latest version of Rebellion.
Multiple Mods, Add-ons and Mod Order
The previous section has all you need to get a simple singular mod working. But what happens if you want to run multiple mods at the same time? It doesn't take long for them to quickly get out of hand, and a single mistake can cause your game to crash even if there are no problems with the mods. 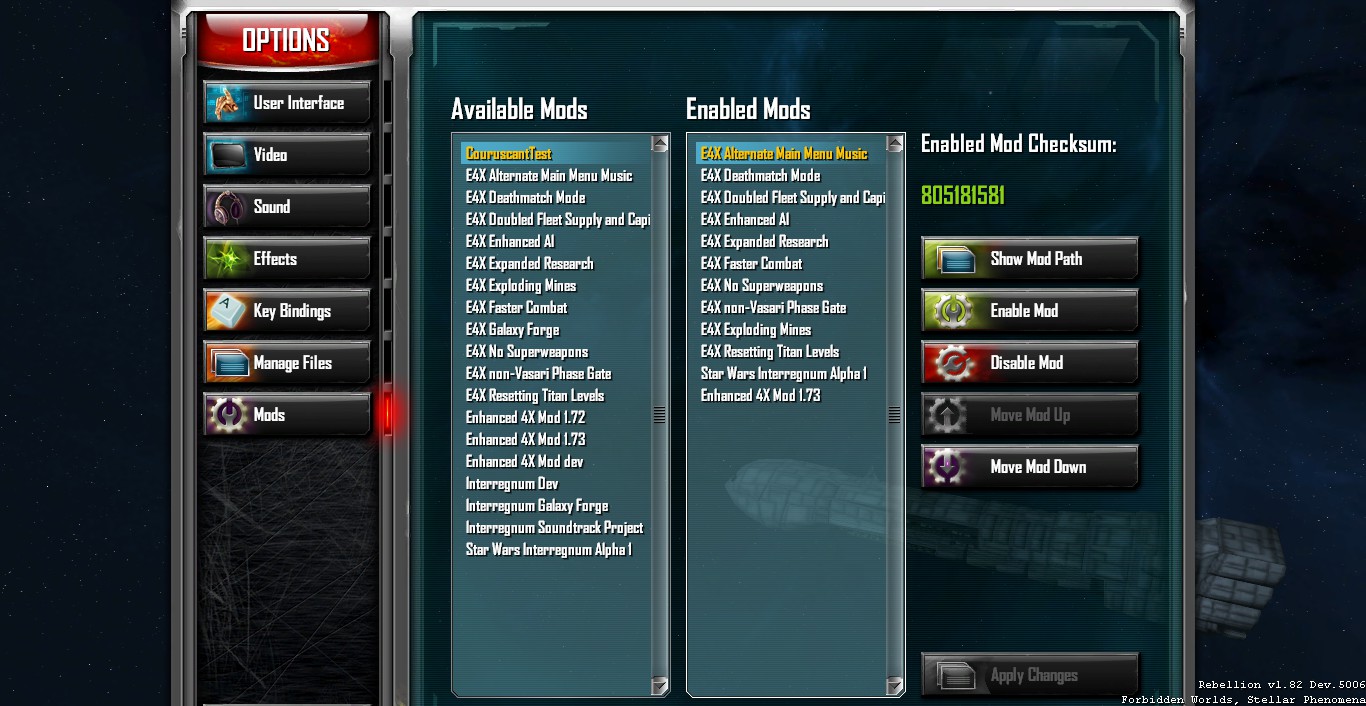 There are several reasons why you may want to enable several mods at one time. The most basic is that you like both of them and want to use them together. Sadly Sins mod system is not the best at doing this, and in general most large mods will crash if you try to use them together. However, you would likely be able to run a mod that improves weapon particles, a mod that changes the music, and a mod that disables superweapons without issue since these mods deal with fairly narrow areas.

However, it is possible that these three mods may require a specific mod order to run correction. Lets say that the mod that improve weapon particles (a visual mod) needs to change the Novalith cannon in order to use the new particle. Well, you already have a mod that changes the Novalith cannon, so the game cannot use both changes. You need to tell it which mod to prefer if there is a conflict. This is done with your Mod Order. In this case, since loads the mods at the bottom of the mod order first, then goes one at a time loading each mod above it. As a result, the mod at the top of your mod order will have the final preference, so in this case we'd want to have Disable Superweapons mod above the graphics mod so that the Novalith is diabled, and every other unit in the game has their shiny new weapon particles.

Also worth noting is that larger mods have add-ons that allow players to customize the mod since it is generally not possible to use these mods with other mods. These type of mods typically have a single "core" mod which contains the minimum or default features, and then the add ons will add or modify certain specific things. Usually you will need to place the core mod at the bottom of your mod list, though you should always check the mod's instructions for specific details on mod order.

FAQs
I installed the mod but it does not work. why?
One of the most common mistakes is having a MyMod x.x.x folder with the MyMod folder inside that.

... will be all the mods files


Only comments on the guide please. Post any question about a specific mod to that mods comment section. If you start with "I have read the readme and ...", it will go a long way in getting a polite, prompt responce, if not, chances are the responce you well get is "Read the readme!".

Thats what it did for me, as soon as i moved the files up, boom.... mod applied successfully, and game on :)

Sordros Feb 20 @ 6:00pm
i myself have tried to follow the setup but it doesnt work! i own a modern computer with win 10 and have been unable to install any mods n if i do manage to get one installed it wont work as specified!