Store Page
Interstellar Rift>  Workshop > valiant7000's Workshop
This item has been removed from the community because it violates Steam Community & Content Guidelines. It is only visible to you. If you believe your item has been removed by mistake, please contact Steam Support.
This item is incompatible with Interstellar Rift. Please see the instructions page for reasons why this item might not work within Interstellar Rift.
Current visibility: Hidden
This item will only be visible to you, admins, and anyone marked as a creator.
Current visibility: Friends-only
This item will only be visible in searches to you, your friends, and admins. 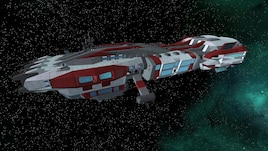 This item has been added to your Subscriptions. Some games will require you to relaunch them before the item will be downloaded.
In 1 collection by valiant7000
The Codex Collection

4 items
Description
The Exodus Prime multi-role light cruiser is a flexible, self-sufficient Tier 1 ship designed for exploration, combat, and gathering or transporting resources in dangerous systems. The ship is also designed with some minor modifications in mind for different mission profiles.

Lore:
Logicorp's investors recently began a push to break away from total reliance on Hurles co. and GT for supplies, and on Sentinel Security for defense. Intent on pleasing their stockholders, Logicorp executives tasked R&D with producing a sturdy, versatile starship that could be deployed rapidly in small numbers to bolster supply, defense, logistics, or other roles in contingent situations. Lacking the resources to meet the exacting specifications on a deadline, Logicorp's engineers turned to subcontractors for an answer.

Logicorp identified the Exodus class exploration frigate from Codex Fleetworks as a near match for their requirements. With executives breathing down their necks, they requested a meeting with Codex's owner and chief engineer, Valiant Maverick, who pitched the idea of a light cruiser that closely resembled the Exodus design. The new ship featured an improved layout, upgraded crew spaces, and slightly increased firepower. Logicorp agreed to sponsor the project, which Maverick christened Exodus Prime.

The legacy of the Exodus class was reborn in a whole new ship, designed from the ground up to meet Logicorp's exacting specifications. True to the designation, the Exodus Prime class multi-role light cruiser can fill several roles, even all at once if necessary. The ship features a full range of mining and manufacturing equipment and ample cargo space for a tremendous range of logistical applications. While not a dedicated warship, she is sturdy, and carries enough firepower to embarrass S3's Mk II Reaper. Her broad range of features and moderate price make the Exodus Prime the quintessential multi-role workhorse, as well as an ideal starship for long-range exploration.

While the Logicorp-branded version has yet to see full production, it is rumored that a select few are currently operating on the far frontier. The stock version of the Exodus Prime class is now available directly through Codex Fleetworks, featuring Codex's vibrant red-on-white color scheme.
< >
4 Comments

valiant7000  [author] Oct 26 @ 11:41am
I'm glad you guys are enjoying this! There are multiple ways to add ramscoops, so be sure to check out the modding guide I included in the screenshots.

daofcmacg Oct 26 @ 6:18am
I see you Valiant. You really went all out to launch your new cruiser class. Good work, hard work pays off everytime.

Soulios Atrika Oct 23 @ 2:00pm
This thing is amazing! i know a thing or two about designing ships, but this, this is elegant, compact, and easy to manage, in other words: the perfect MID tier ISR ship! the one change i made on my custom version is removing the ejector ports in the utility bay and putting in an ramscoop. I would like to see a T3 version of this searies in the future, one with a drone hangar included.
< >