Store Page
Besiege>  Workshop > AnonymousAlpaca's Workshop
This item has been removed from the community because it violates Steam Community & Content Guidelines. It is only visible to you. If you believe your item has been removed by mistake, please contact Steam Support.
This item is incompatible with Besiege. Please see the instructions page for reasons why this item might not work within Besiege.
Current visibility: Hidden
This item will only be visible to you, admins, and anyone marked as a creator.
Current visibility: Friends-only
This item will only be visible in searches to you, your friends, and admins. 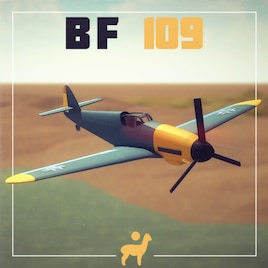 AnonymousAlpaca
Offline
See all 5 collections (some may be hidden)

This item has been added to your Subscriptions. Some games will require you to relaunch them before the item will be downloaded.
Description
Background
The Messerschmitt Bf 109 is a German World War II fighter aircraft that served as the backbone to the German Luftwaffe. The plane was so far superior to its opponents at high altitudes and speeds that it was specificallt avoided by soviet pilots in combat.

My aircraft tried to stay true to the original mainly in design, but also in functionality. My recreation of this plane features dual auto 9x guns, a detailed cockpit, aswell as air brake flaps.