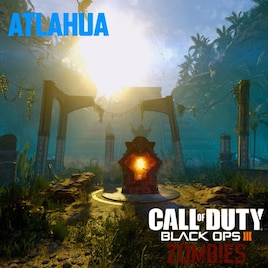 steviewonder87
Offline
See all 1137 collections (some may be hidden)

This item has been added to your Subscriptions. Some games will require you to relaunch them before the item will be downloaded.
Description
An Aztec cave system underneath the Mexican jungle, long rumoured to be a place of human sacrifice to the Mayan God of Water Atlahua...


If you enjoyed this map please consider making a donation to the creators to show your appreciation it would mean a lot, make sure to mention it's for Atlahua - https://www.paypal.me/mdorning234

Credits:
Planet for the main EE concept and scripting
HarryBo21 for the spiders, bats, base script for the miniboss, some weapons, ported fx
Symbo for the arrow trap and ZNS plants
Flipthebit for some scripting assistance
Tito for help with the original BO1 weapons and the acquisition of some models
DTZxPorter for creating Wraith
ProRevenge for his updated Ray Gun
Scobalula for his tools
Azsry for his custom slide animation tutorial
TheSkyeLord for his BO4 ports
RDV for his reverb tutorial
Kingslayer Kyle for help with porting the mystery box

Also if you liked this map check out my other maps Frigid and Area 51-
https://steamcommunity.com/sharedfiles/filedetails/?id=1777318715

Follow me https://twitter.com/steviewonder087 for updates on future maps.
Popular Discussions View All (5)

AL NEMSIS Jan 15 @ 2:52am
I wish to be black like a frag in dark inside the brag eating orange Im black in the dark close the light i will disappear like a frog.

gigabowser20 Dec 14, 2022 @ 5:52am
Excellent map all around, the allistar folley being here with charge effects is amazing. I’m sure the map is no longer able to be updated and not sure if the created checks this still, but if so there are two small things that I’d like to see to make the map perfect:

Buff the fire and grass effects of the folley. Both allow you to still get hit while the zombies are slowed, making them much worse than the other two. The fire also has a strangely small radius, in bo4 it instant killed so if that could be done it would be great

TasteTheWeenie Oct 2, 2022 @ 8:41pm
Really good map but very buggy. It took me so long to complete the EE couldnt go one game without encountering a bug. 8.5/10

djakadylan Jul 22, 2022 @ 5:59pm
completed the trail where it gives you crappy guns to survive with and after the round it never gave me my guns back and wouldn't let me buy any either

๖คፈɬเς Ꮄน∂Ꮛ May 19, 2022 @ 10:59am
It's got a cool theme but unfortunately the map design is just nothing but dull corridors. The only cool places in the entire map are PaP and the bridge.
< >