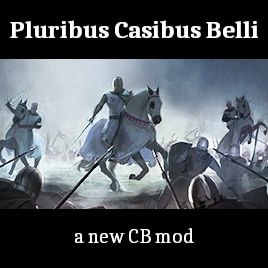 Dragatus
Offline
See all 230 collections (some may be hidden)

This item has been added to your Subscriptions. Some games will require you to relaunch them before the item will be downloaded.
Description
This mods currently adds five new CBs, but I plan to add even more. These CBs can also be used by the AI, but AI rulers will have additional requirements, which are often based on their personality. Certain CBs (such as Rivalry) can also be used only by or against human rulers. I don't want AI rulers exhausting themselves in an endless stream of wars that neither benefit the AI nor add to the player's fun.

NEW CBs
Currently the mod adds the following CBs:
- Hostage Liberation War: liberates all spouses, concubines, family members, friends, soulmates, known lovers, subjects, and lieges who are imprisoned inside defender's realm or have been stolen from you by the defender or their subjects
- Rivalry War: fight a war to imprison all your rivals in the defender's realm
- Civilize Borderland: conquer a tribal county on your border
- Shatter Empire: if you're an emperor you can fight a war to destroy another empire and gain massive prestige
- Depose Man/Woman: if you have the right kind of faith you can fight a war to depose a Righteous/Astray ruler of the opposite gender and force them to abdicate to an heir of your gender and if you're of higher rank the heir will become your vassal

MORE DETAILS
Hostage Liberation War should be pretty damn exhaustive, but there are a few edge cases where it fails. It will not get back any spouses that are 66+ years old or concubines that are 41+ years old. The reason behind is fairly complex, but essentially it has to do with the default age of adulthood and the duration of opinion penalties for divorce and being set aside.

Civilize Borderland requires you to have feudal, clan, or republic government and your culture must be in at least the Early Medieval Era. The target tribal also can't have your culture.

Shatter Empire is a massive war of empire vs empire. You spend 5000 Prestige to start it and if you win you get back twice as much and all your opponent's empire tier titles are destroyed. However, if you lose the war you will lose 10000 Prestige and it will be your own empire titles that get destroyed. Use with caution.

Depose Man/Woman CB requires you religion to match the following criteria:
- dominated by your gender
- priests can be only of your gender
- must be fundamentalist
- must have a militant tenet (Armed Pilgrimages, Pursuit of Power, Struggle & Submission, Unrelenting Faith, or Warmonger)

Two existing faiths match these conditions for male rulers: Almohadism and Quaranism (both Islamic). Female and non-Islamic rulers will have to make their own custom religion in order to use the CB.

Perhaps most crucially the CB can only be use against rulers that your religion considers to be Righteous or Astray. Anyone that is Hostile or Evil is intended to be coqnuered with holy wars instead.

COMPATIBILITY
The mod doesn't modify any existing game files and should be compatible with more or less any other mod out there, but it is a gameplay changing mod and will prevent you from getting achievements.

KNOWN ISSUES
There has been a report of the mod freezing the game after a player's empire grew too large (covering a quarter of the map). I have a suspicion I know what's causing the problem and hope to address it soon.

SHAMELESS SELF-PROMOTION & SELLING OUT
If you like the mod I would be grateful if you could like or favorite it.

If you like this mod you might also like my newest mod Pluribus Casibus Belli which adds several new CBs, including the very useful Hostage Liberation War.

Herr Wolf ✠ Jun 8, 2021 @ 5:02pm
How some of these aren't in the base game is so incomprehensible that I'm convinced they removed them solely to be added in as paid DLC.

playboicalorie May 21, 2021 @ 9:07am
I've noticed that holy wars need "Paragon of Virtue" to be launched, is this because of this mod?

Arkras May 9, 2021 @ 12:20am
Why have you put "Pluribus casibus" in dative/ablative plural? Shouldn't it be in nominative plural?

B7E7 Feb 10, 2021 @ 3:09pm
Hi, would you consider adding a generic CB (i.e. one not tied to human sacrifice tenet), that allows raiding/warring with neighbours for prisoners/slaves please?
< >