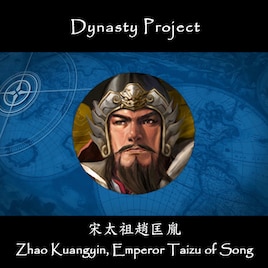 Phantagonist
Offline
See all 35 collections created by Phantagonist and other people (some may be hidden)
You need DLC to use this item.

This item has been added to your Subscriptions. Some games will require you to relaunch them before the item will be downloaded.
In 1 collection by Phantagonist
Phantagonist: Dynasty Project Collection 王朝計劃合集

Phantagonist  [author] Jun 26, 2021 @ 6:39pm
@ Andreas
Both Fan Zhongyan and Emperor Huizong of Song were born in Northern Song. Do not worry, I have quite a number of choices of Southern Song figures in my mind.

P.S. By the way, I have just uploaded another Northern Song Emperor. Zhao Xu, Emperor Shenzong of Song, comes with his counsellor Wang Anshi, the Reformist.

Andreas Jun 26, 2021 @ 2:16am
范仲淹 Fan Zhongyan. He could be a good choice for a Southern song leader, if they would focus on Education. Or maybe Emperor Huizong of Song, he did increase the effort of rebuilding public schooling, and was huge on culture. So a science, culture leader. Increased great people for great artists. Just throwing ideas out there.

Phantagonist  [author] Dec 23, 2020 @ 3:17pm
Thank you for feedback. A mod based on the Southern Song Dynasty would be interesting, but I would need to find a suitable Southern Song leader first. Perhaps I should look beyond the emperors...

Andreas Dec 22, 2020 @ 5:51am
How about just Song? free flow of information, no dragonic laws to prevent people's freedom. Big leap in terms of food production. The free flow of information was a big part of the great increase in Knowledge and science. The economy was affected by their increased international trade, and their large population. So just some ideas for a South song mod. More food, more aminety, penalty for establishing many cities, plus gold from rivers, more science, less production towards land units, but more easier production towards campauses, comercial hubs, and theater squares. The Song dynasty is my favorite dynasty in Chinese history. Especially the Southern Song.