Store Page
Squad >  Workshop > [1] LaughingJack-ASO-'s Workshop
This item has been removed from the community because it violates Steam Community & Content Guidelines. It is only visible to you. If you believe your item has been removed by mistake, please contact Steam Support.
This item is incompatible with Squad. Please see the instructions page for reasons why this item might not work within Squad.
Current visibility: Hidden
This item will only be visible to you, admins, and anyone marked as a creator.
Current visibility: Friends-only
This item will only be visible in searches to you, your friends, and admins. 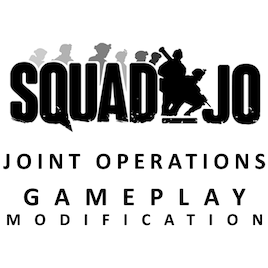 This item has been added to your Subscriptions. Some games will require you to relaunch them before the item will be downloaded.
Description
V1.0.2

Squad_JO is a Gameplay modification of Squad, based on the classic game Joint Operations from 2004 - "western democratic" coalition forces versus "rebellious anti-western" allies.
It retains Squads' organisation & communications but removes much of the structured role-playing elements required by players, allowing for a more accessible playing style that highlights 'playing the objective'. With headshots and knife attacks killing outright and no rally points, this makes for a more deadly game that puts a greater value of life on the player and encourages smarter play, with plenty of room for tactical styles that don't rely on the 'FOB-crafting' meta.
The Mod includes Multi-faction teams, modified Gamemodes for AAS & TKOTH and numerous new assets. It also includes numerous gameplay layers for a bunch of Squad-vanilla maps as well as three classic Joint Operations maps; Black Rock Beach, Dormant Volcano Isle & Twin Islands.

Highlights:
- Tickets now only account for total captured points (AAS) or accrued time (TKOTH).
- Capture zones have perimeter circles, animated flags and spawnpoints driven by team ownership and contested state. They also have Friendly vs Enemy player counts (HUD) and player Distance-To-Cap readouts on contestable Caps (Map).
- Armouries(ammocrates) are combined 'Global usage'(useable by both teams) and have a 30 second cool-down timer between successful uses.
- Team & Neutral vehicles have no requirement for Claiming or Role.
- Vehicles have modified radial menus and faster enter/exit/change-seat time.
- Vehicle spawners can be located on/near capture points.
- Modified role 'loadouts' and the way roles are sorted in the armoury, role & deployment menus.
- Removal of Logistic, Deployable & Building systems and the Commander role.
- Soldiers have been modified to remove Stamina penalties and stop physical bleeding and thus bandaging; Medic now one-click revives and heals more quickly.
- Sprinting has been modified to allow jogging. Using the sprint key above 3.4m/s will lock sprinting ON. Sprinting will continue if then going Crouched or Prone; if not in sprinting mode then the sprint key can be held to sprint-crouch or sprint-prone. Sprinting will continue locked ON until going ADS or releasing(momentarily) the forward key. Movement is otherwise the same as Squad vanilla.
- Focus 'zoom' has been disabled and ADS fov has been changed to compensate on all carried weapons; Focus now works for 2 seconds.
- ADS Zoom Breath Hold (steady) and Sprinting will not work when in water and "swimming".
- Teams include: Team1 (US, GB, CAN & AUS) vs Team2 (Ins, Mil & MEA), which will be expanded on in the future.
- Cooked for Windows and Linux.

Please see the Changelogs for a fuller description of changes.
There is also a link to my YouTube, at the right, where you will find an assortment of Development videos - see the latest Update vids for more detail.

The server is now back up and updated to v1.0.2

All appears to be working fine. Added function in the vehicle spawner to clean up wrecks on the spawnpoint, so wrecks on helo pads should get destroyed and a new vic/helo can spawn, though remember there is a 2 minute wait between spawns, so not instant.

The server is now back up and updated to v1.0.1

All appears to be working fine.

A small update to fix the helicopter repair pads from not working on Twin Islands. The pads should now set their Team to suit the vehicle/helo that enters it, so it repairs and reams properly.
Also fixed the Rebel team CAS helo from having unlimited ammo. Also fixed Twin Islands level being set to 'never add to rotation' which may have caused issues when the game came to rotate to a layer using that level.

The server is now back up and updated to v1.0

Finally we have amphibious stuffs! w00t!!
Apart from that not many changes this update. Time was mostly spent fixing missing/broken things from the v3 SDK update.

Added buoyancy to the ATV and the Stryker. Added the UH1Y & UH1Y-CAS helicopters.
NOTE: the CAS version has some issues getting airborne from freshly spawned - the trick is to yaw about 90 degrees at full throttle on the pad and wait for it to un-stick itself (to be fixed; appears to be an issue with the helo itself that is not yet known). after lifting off or landing or enter-exit. it appears to be fine on all subsequent lift-offs.

I am updating the mod for the latest v3 of Squad and thus the server and current version is out of date.
There has been a lot of changes under the hood and a bunch of stuff got broken so it may take a little while to complete the update but I'm endeavouring to get it finished as soon as possible.

Fixed a few things. Main change is the de-buff when 'swimming'. Iv'e changed it to effectively disable the breath hold steady function whilst swimming, instead of the zoom=0 thing, which tbh did not work out how i'd planned or liked.

Big news though is that Squad is going V3 shortly and we finally get amphibious vehicles! i'm also hoping for proper swimming for the soldiers as well, but i can only cross my fingers for that atm.

[1] LaughingJack-ASO-  [author] Jun 11 @ 4:24pm
@GeneralJohnSmith hey there, sorry for the late reply. You should be able to find layers by the prefix "JO_AAS_". As for servers, JO_mod, JO, or Joint Operations, or something similar as servers names will vary considerably.
< >