Store Page
Divinity: Original Sin 2 >  Workshop > MDZ Kimchi's Workshop
This item has been removed from the community because it violates Steam Community & Content Guidelines. It is only visible to you. If you believe your item has been removed by mistake, please contact Steam Support.
This item is incompatible with Divinity: Original Sin 2. Please see the instructions page for reasons why this item might not work within Divinity: Original Sin 2.
Current visibility: Hidden
This item will only be visible to you, admins, and anyone marked as a creator.
Current visibility: Friends-only
This item will only be visible in searches to you, your friends, and admins. 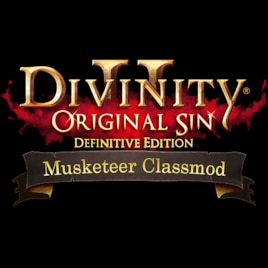 MDZ Kimchi
Offline
See all 1807 collections (some may be hidden)

This item has been added to your Subscriptions. Some games will require you to relaunch them before the item will be downloaded.
Description
The Musketeer Mod
>>Official Website Link<<[wuergrob.github.io] 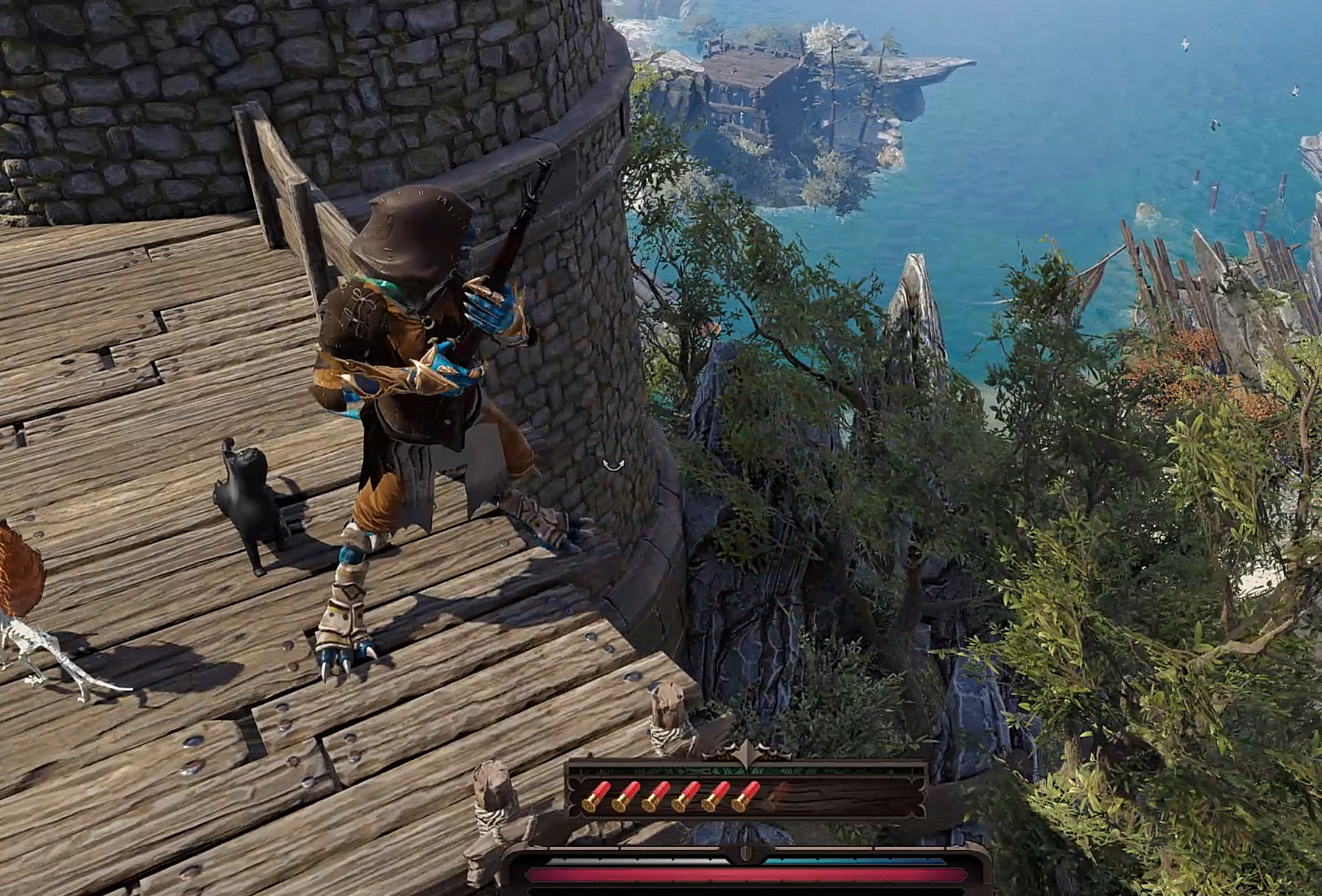 For questions, feedback or bug reports, feel free to send a mail to mdzkimchi@gmail.com, or contact me on the Larian Studios Discord Channel.

If you're feeling generous, then feel free to support me by leaving a tip here:

Installation - Animation Plus
Animation Plus can simply be installed by subscribing to it on the Steam Workshop here:
https://steamcommunity.com/workshop/filedetails/?id=1511606728

Once subscribed/downloaded, it should be available in the Game's Mod Menu. Make sure to put Animation Plus above the Musketeer Mod! (See the picture below) 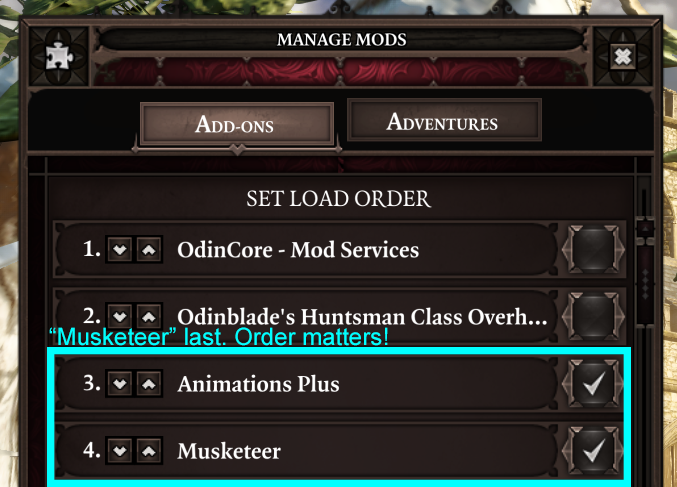 New Features
Features: New Weapons
The Musketeer Classmod introduces Rifles to the game as an alternative to traditional bows and crossbows. Unlike other ranged projectile-based weapons, rifles use ammonition and have to be manually reloaded. Reloading takes time and will occupy you until your next turn.

In total, 3 different types of rifles are available in this mod: 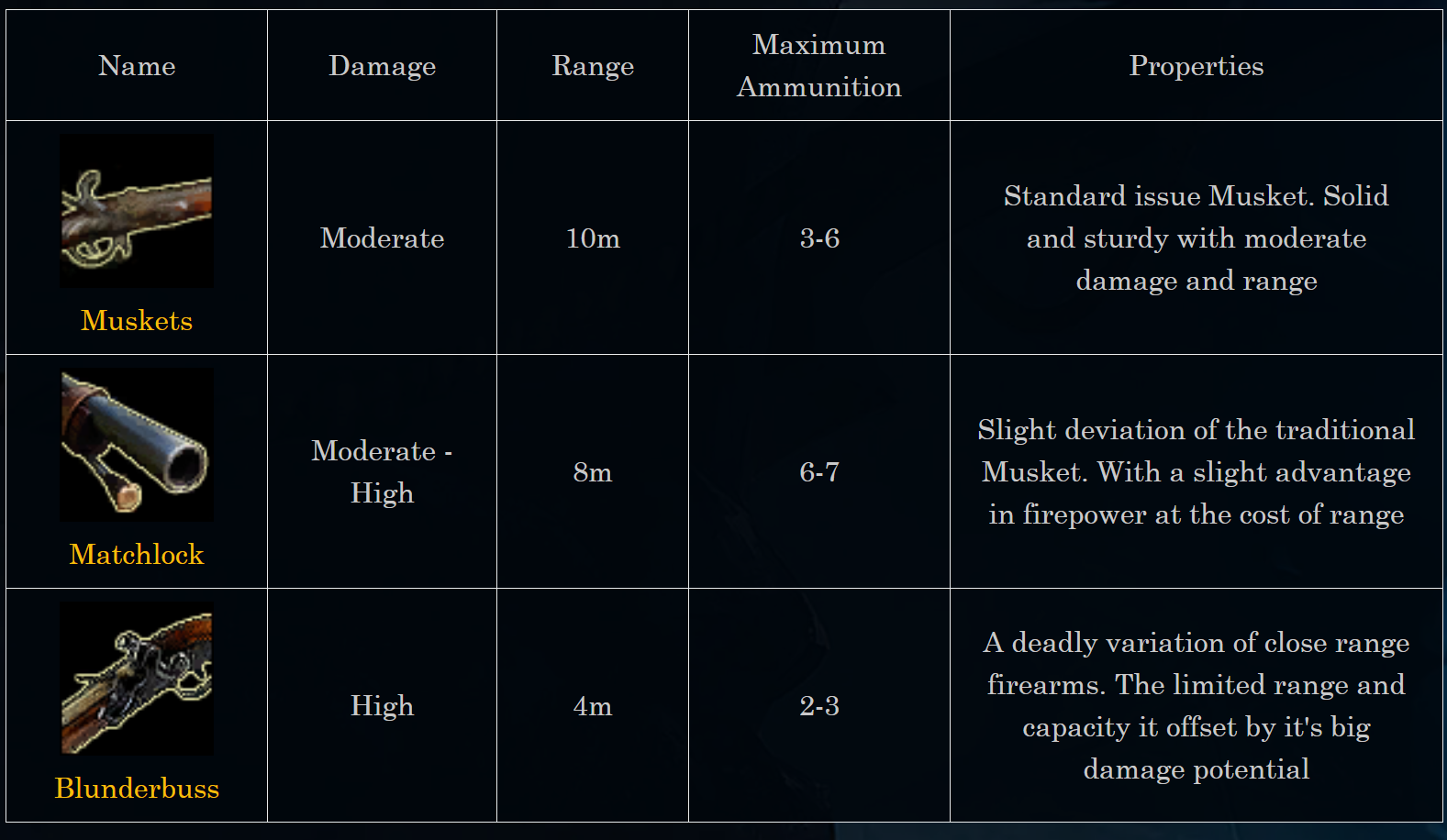 Features: Ammunition Bar
Unlike Bows that seem to have an infinite supply of arrows, rifles require ammunition. Muskets, Matchlocks and Blunderbusses need to be reloaded when empty, as you won't be able to shoot otherwise.

A total of 15 new unique Skills complement the Musketeer Mod, along with 6 different Ammunition-Types to spice it up even more!

A detailed overview of all the Skills can be found on the Official Website[wuergrob.github.io]. 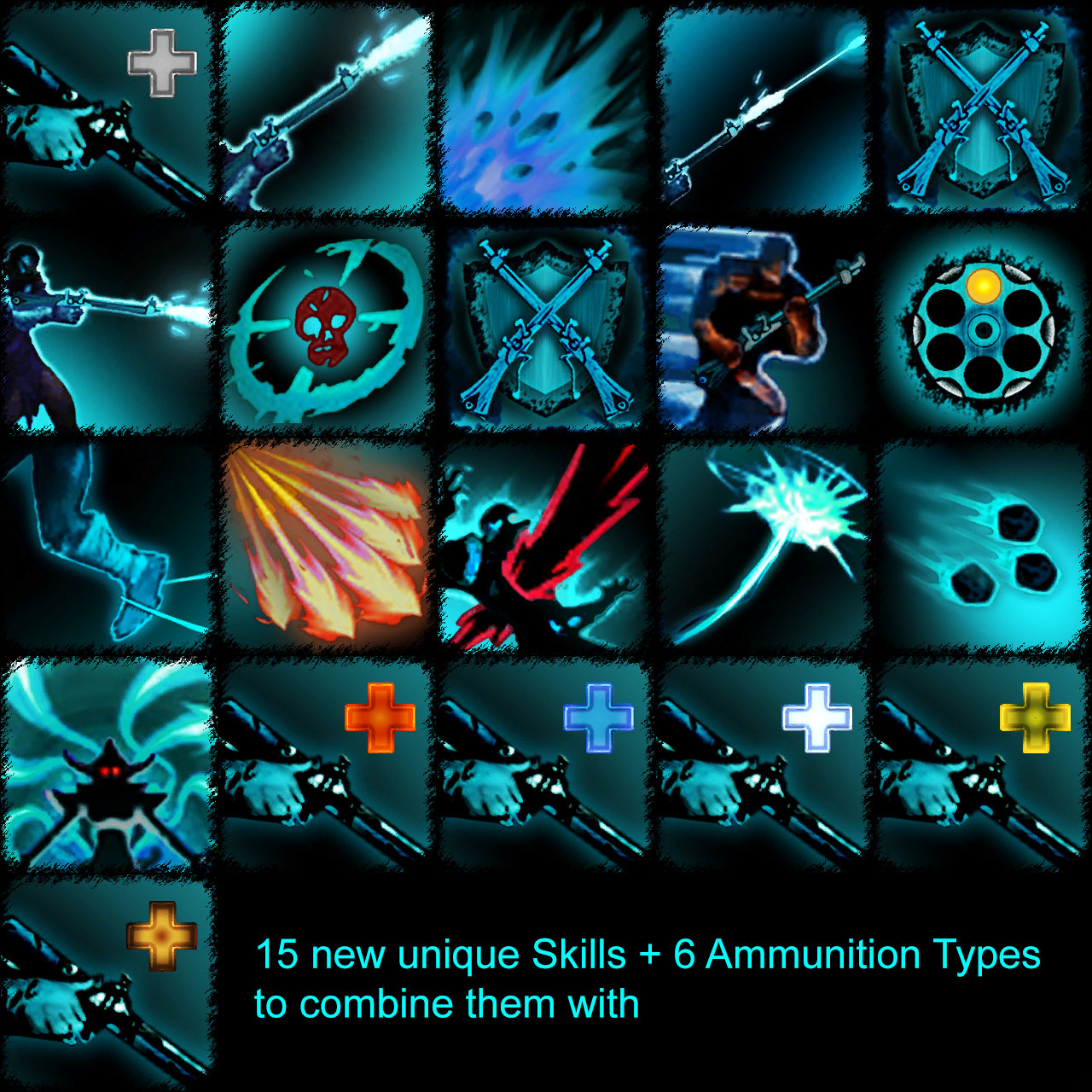 Features: Marking Mechanic
Most of the new Skills introduced by the Mod have additional effects when used on marked targets. Marking enemies works by using mark applying skills. Marking gives you the option to conserve ammunition and set up your next turn. Shooting off all your ammunition without thinking is a surefire way to run out of ammunition when you need it most!

Marks can be applied with the following skills:

Features: AmmoBar User Interface
Never lose track of your ammunition count. The AmmoBar will always show you how much Ammo you have remaining, how much Ammo a skill consumes or restores, what your weapons maximum capacity is and what Ammunition-Type you have equipped. (PS: It's also draggable! So move it wherever you want it to be. 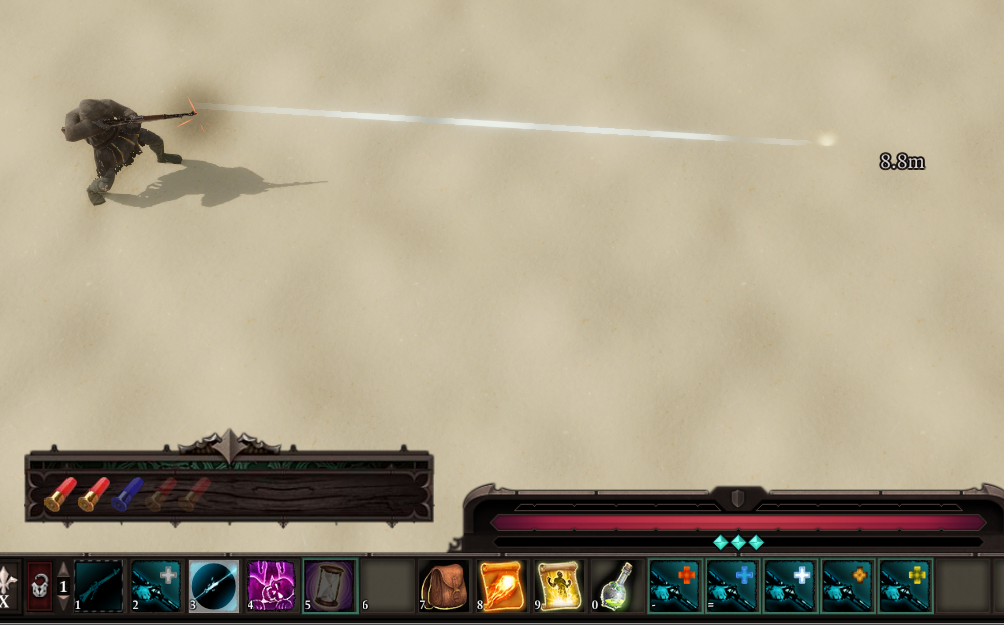 The Fiery-effect on top of the AmmoBar tells you, that you currently have Incendiary Ammunition equipped, have 5 shots remaining out of a maximum capacity of 5 shots. The Ammunition-Costs of all spells are noted in their descriptions and will be displayed on the AmmoBar as a flashing dark blue Ammunition-Symbol when you hover over a skill.

Entering or Leaving combat automatically reloads your currently equipped weapon. Using the bedroll out of combat will also reload your weapon.

Gameplay: Where to get Skillbooks and Firearms
Firearms and Skillbooks can be bought at all Vendors that sell Huntsman gear and can also be dropped just like other Huntsman stuff.
Popular Discussions View All (6)

AustinIsLost Sep 27 @ 6:19pm
why does the ammunition bar have shotgun shells?

MEAT MISSILE Sep 16 @ 8:11am
I'm not sure is it a bug or not, but how do I make Covering Fire skill deal any damage? I've tried long distance shooting and close quarters combat, groups of enemies and single targets, but there's no damage done to them, though animations and sound been playing and ammo was consumed. Otherwise everything's working fine by far (1st act). Maybe I've just missed some specific conditions or combos with this skill.
Thanks in advance!

Alfather_Odin0091 Aug 21 @ 8:18am
i would love to see more skills and more guns with various innate skills and stats maybe have more than 6 ammo or maybe other none firing skills like the blitzkrieg or something

L115 Aug 18 @ 2:19am
Petition to add a unique musket named Whisper, that has 4 bullets and gives the Final Act skill

Pixel_Cannon Jul 17 @ 5:18pm
hmmm Blitzkrieg mastery on the blunderbuss doesn't seem to work, says it lowers the ap by 1 but it still cost 2 when i cast it.

Ghrin Apr 21 @ 8:08am
Are there unique guns that this mod adds? Sorry if this is answered somewhere else

Kelain Mar 12 @ 4:22am
Hi Kimchi, doing another playthrough with your excellent mod! I'm curious, would you be able to clarify what levels the various skillbooks in this mod spawn at? The lack of Musketeer-based source abilities by level 13 feels a little off to me.

Phantom Wolf Jan 28 @ 7:58pm
@MDZ Kimchi i finnaly found them after uninstalling all mods and reinstalling lol i dont know why that fixed it but it did lol i dont know if they conflict with anything but they are there now lol thank you.
< >