GameMaker: Studio>  Workshop > E-MoeGee's Workshop
This item has been removed from the community because it violates Steam Community & Content Guidelines. It is only visible to you. If you believe your item has been removed by mistake, please contact Steam Support.
This item is incompatible with GameMaker: Studio. Please see the instructions page for reasons why this item might not work within GameMaker: Studio.
Current visibility: Hidden
This item will only be visible to you, admins, and anyone marked as a creator.
Current visibility: Friends-only
This item will only be visible in searches to you, your friends, and admins. 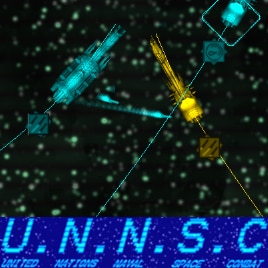 This item has been added to your Subscriptions. Some games will require you to relaunch them before the item will be downloaded.
Description
HELLO NEW RECRUITS OF THE UNITED NATIONS NAVAL SERVICES

Welcome to the finest space fleet in the known universe. UNNSC is a turn based strategy game where you and a friend play as air traffic control officers aboard a military space ship. You issue commands to space ships, then watch your decisions play out in real time.

In UNNSC, You start the game by choosing which ships you want to use.

With the ships selected, you and your opponent are then dropped into a randomly generated star system. Both players travel around the star system capturing planets. While capturing these planets, you’ll find upgrades for your squadron. Player one's objective is to chase down the second player. Once both players land on the same planet, or a player lands on a planet captured by the opponent, the match will begin.

Each match is made up of three turns. In the first turn both players will nominate one ship as their flag ship. If this ship is destroyed, then the opponent wins the game. If however both ships are alive by the third turn. The player who did the most damage to their opponent wins. Each turn the player will assign each ship what armament to use, and then they will instruct that ship where to go. Once the third turn is reached, the winner is decided and the players go to a new star system and start from the beginning!

If you have any suggestions on how to improve the game, I'm all ears, but I cannot promise it will get put in.

Thanks for stopping by!