Greenlight > Games > Shissa's Workshop
Greenlight is being retired. For more information on how to submit games to steam, refer to this blog post.
This item has been removed from the community because it violates Steam Community & Content Guidelines. It is only visible to you. If you believe your item has been removed by mistake, please contact Steam Support.
This item is incompatible with Greenlight. Please see the instructions page for reasons why this item might not work within Greenlight.
Current visibility: Hidden
This item will only be visible to you, admins, and anyone marked as a creator.
Current visibility: Friends-only
This item will only be visible in searches to you, your friends, and admins.
Dead Effect
Description Discussions18 Announcements9 Comments854 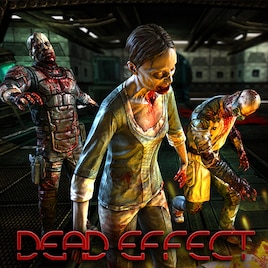 nazghul
Offline
See all 125 collections (some may be hidden)

View Dead Effect in the store

Store page
Recent Announcements View All (9)
The PC trailer is out!
April 2, 2014 - Shissa

As we promised, here's the first look at Dead Effect on the PC! You can look forward to next week, when we'll release the long expected Early Access version of the game.

We apologize to everyone for the wait. We had to take care of a few formalities concerning the game.
Everything is back on track now and we can finish the Early Access Demo, as we promised.
If everything goes according to plan and no complications arise, it should be ready around the beginning of April.

Here's the first view of the zombie hell we're preparing for you.

Read More
Description
Release date: The release of the game is currently scheduled for the second quarter of 2014.
Fight for your life in the INDIE SCI-FI FPS game fit for both casual and hard-core gamers with a passion for hunting down hordes of zombies. Prepare yourselves for the incoming nightmare!

The ESS Meridian starship is travelling through space with a new FTL technology, heading towards its destination - Tau Ceti f, the first planet in the history of mankind to be colonized. A few months later an elite member of Unit 13 is disrupted from cryogenic sleep. But Tau Ceti f is nowhere in sight and something is very wrong. What happened to all those people? Why are they so aggressive and attack without any survival instincts?

Regarded as one of the best mobile FPS games of 2013

Key features:
- Epic single player campaign with over 5 hours of gameplay and a story that will draw you in.
- Unlike the mobile version, this has a huge amount of infected enemies.
- Lots of detailed weapons which can be upgraded.
- Unique Survive and Biohazard modes.
- Atmospheric soundtrack.
- High resolution textures with normal maps and improved metal look.
- Real-time shadows.
- Improved blood effects and postprocess, more particles everywhere.

AnaI Prolapse Suffocation Dec 19, 2014 @ 6:03pm
these zombies are scary not like the stupid dayz ones :P

XIIICaesar Oct 12, 2014 @ 11:14pm
Cant wait for this to hit PC. The mobile version is insane. I hope you offer controller support.

Dead Effect has been Greenlit and is now listed in the Steam store. For the latest information, purchase options, and discussions for Dead Effect, please see it on the Steam Store or in the Steam Community.
Visit Store Page
For more details Visit Community Hub
For latest discussions
If you really, really want to, you can continue to the Greenlight page. Information on this page may be out of date, since all the action has moved to the areas noted above.