Store Page
Crusader Kings III>  Workshop > SarcFa's Workshop
This item has been removed from the community because it violates Steam Community & Content Guidelines. It is only visible to you. If you believe your item has been removed by mistake, please contact Steam Support.
This item is incompatible with Crusader Kings III. Please see the instructions page for reasons why this item might not work within Crusader Kings III.
Current visibility: Hidden
This item will only be visible to you, admins, and anyone marked as a creator.
Current visibility: Friends-only
This item will only be visible in searches to you, your friends, and admins. 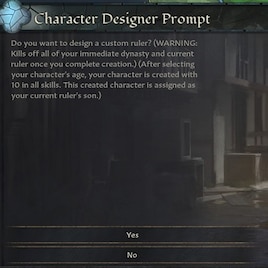 SarcFa
Online
See all 286 collections (some may be hidden)

This item has been added to your Subscriptions. Some games will require you to relaunch them before the item will be downloaded.
Description
A mod that adds an event chain that lets you make a custom ruler. Keeping this up for anyone who still wants to play on earlier patch versions on the game.

The mod handles the custom character generation by creating a character and, depending on your choice, makes them a random disconnected dynasty member or child of your current ruler.

To get the event chain, go to the decision menu (pressing F8 opens it), and select "Trigger Character Design Event Chain", and then confirm.

At the moment you have to be of the first ruler's dynasty.

You can select a male or female character, education traits, personality traits, physical and congenital traits, stress management traits, health traits, commander traits, lifestyle traits, and some other traits, sexuality, culture, and religion. You can also modify your base skill amounts, and name your character. You can also change your character's height and body weight.

You can add and remove any traits from the categories mentioned above.

Traits that cause characters unable to inherit are not selectable.

Also in the game rules is the option to disable the character design decision after use, or for it to never disable.


Planned additions/changes:
Nothing, since the base game added it's own ruler designer in 1.2.


Feel free to use anything in my mod in anything else. Crediting is appreciated.

Partial Incompatibility - Any mod that adds traits, cultures, religions will not be fully covered by this mod. Also full conversion mods, since they completely change or remove base game cultures/religions, will not work with this mod. I will look into making compatible versions at some point. (Mod will still run, but options from other mods aren't covered, and if base cultures/religions are removed, none of the choices of such will work in the event chain)

(Note, the mod is updated fairly often so the parts of the newest updates tend be google translated until an update is received)

Paradoxplaza listing of the mod in case you want to subscribe there instead of here.[mods.paradoxplaza.com]

Dropbox download of the mod zip here for people that like manual installations or use non-steam versions.[www.dropbox.com]

To anyone experiencing issues:

2. Please include a screenshot showing what your issue is, or a thorough description, along with a list of other mods you are using, if you are.

3. Information like "the decision doesn't appear for me" does not help me, since when using the same version I've uploaded to here and paradoxmods, it always appears for me. The only advice I can give in that situation is to delete/re-download or try another source (paradoxmods, dropbox, etc), and to make sure the mod is activated.

- Quick change: Made it so the character portrait wouldn't duplicate in dynasty tree or family member's screens when using child of ruler option.

- Changed how the character inherits. Your custom character is no longer made a child of the current ruler selected, and are instead made the "designated heir". This allows making characters older than the character selected.
- Added an event that gives any custom character that was made under 16 a random education trait roughly 5 days after they turn 16. Equal chances between all the traits for what stat they are for, higher chance for a tier 2 or tier 3 trait, lower chances for tier 1 or tier 4.
- Fixed pure blooded bug with point system.
- Changed point cost of Khan of Khans and Crusader King traits. Khan of Khans has been increased to 12 point cost from 6, Crusader King has been increased to 8 from 3. Still looking into how to balance prowess values.
- Made it so that your vassals and courtiers no longer have "opinion of predecessor" on the custom character. This can both hurt and help. Sometimes it was a rather sizeable relation penalty, other times it was a decent boost. In the cases where it was a penalty it should made transition somewhat smoother.

- Quick small change. Made it so if you choose the dynasty disinherit option, they lose the trait after your character inherits, to not disrupt the larger dynasties.
Popular Discussions View All (5)

Luzilyo Jul 1 @ 10:55am
well done, you did a really good job with this mod
just came here to press f for respect.

matt81093 (Jojo) Jun 25 @ 1:33pm
Have to thrown in that in some ways, this is indeed better than the in-game ruler designer. I understand why you left it as-in when it came out, but just throwing in my support.

Vuran Mar 25 @ 5:53am
We all knew that this day would come. We salute you. You will never be forgotten.

ThePope Jan 9 @ 6:57pm
Also, the designer in game has limits to trait combinations that your mod doesn't have. at the very least a version update to match the game version would be nice so the game stops saying the mod is out of date perhaps?

once you made a character you cant make anymore! so your mod is very important to me and alot of people.