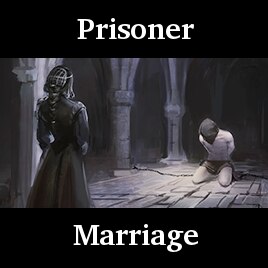 Dragatus
Online
See all 645 collections (some may be hidden)

This item has been added to your Subscriptions. Some games will require you to relaunch them before the item will be downloaded.
Description
This mod has two main features:
1) New interaction "Arrange Marriage for Prisoner" allows you to marry unlanded prisoners to yourself or your unmarried courtiers, even if the prisoner is already married.
2) The new CB "Reclaim Rightful Spouse" allows fighting a war to get back any spouses that were stolen from you using either "Arrange Marriage for Prisoner" or "Make Concubine/Consort".

The mod doesn't add any CBs that will get back other relatives that are stolen from you using the new interaction, but my CB mod Pluribus Casibus Belli does have a new CB called "Hostage Liberation War" that will do that and much more.

MORE DETAILS
When you use "Arrange Marriage for Prisoner" the marriage will automatically be matrilineal if you marry the prisoner to a woman.
The interaction doesn't work on rulers. You can only use "Arrange marriage for Prisoner" on unlanded characters.
When you marry a prisoner from another court or make them a consort/concubine they will get the "Forced Recruitment" opinion modifier towards you (-15 for 10 years). Exception: they don't get that opinion modifier if you marry them to a lover or soulmate.
When a wife or husband is stolen using either "Arrange Marriage for Prisoner" or "Make Concubine/Consort" the former spouse will get a "Wife/Husband Stealer" opinion modifier towards the thief (-20 for 20 years) and a "Rightful Spouse" opinion modifier towards the stolen spouse (+5 for 20 years).
You can only use the new CB while the "Rightful Spouse" opinion modifier is active, so you have a 20 year window to reclaim your spouse. If the war is in progress when the time runs out it will become invalidated.
Re-marrying will prevent you from using the CB or if you already started the war it will get invalidated.

Overrides the new opinion modifiers from CK3 1.1 related to taking prisoners as concubines. I hope to get this fixed within the next 48 hours.

COMPATIBILITY
This is a gameplay changing mod and will prevent you from getting achievements.

It doesn't edit any unmodded files, but it does edit the scripted effect concubine_on_accept_effect. This could potentially make it incompatible with some concubine system altering mods, however it should be compatible with both the same sex concubine mod and the one that allows you to take other people's concubines for yourself.

As such it will be incompatible with any other mod that modifies taking concubines.

SHAMELESS SELF-PROMOTION
If you like the mod I would be grateful if you could like or favorite it.

If you like this mod you might also like my newest mod Pluribus Casibus Belli which adds even more new CBs, including the very useful Hostage Liberation War.

If you still play Crusader Kings 2, there is a version of this mod available for that too: Prisoner Marriage for CK2

I also created a Discord server[discord.gg]
Popular Discussions View All (1)

Dausdiscodisco 7 hours ago
update it plsss

MachEvil 22 hours ago
Will this be updated for Royal Court?

大笔哥的野望 May 21, 2021 @ 10:14pm
此MOD与WE框架里的奴隶不兼容，在WE框架关掉可正常使用，WE框架里的奴隶系统目前只是框架并无事件内容所以可以优先选择此功能
This mod is not compatible with the slave in we framework. It can be used normally when we framework is turned off. The slave system in we framework only has the framework and has no event content, so you can choose this function first

Kallaste Mar 7, 2021 @ 9:00pm
I do wish it worked for rulers, simply allowing them to be deposed with the forced marriage. There is certainly a case for it in historical accuracy. They could leave the position of power, but have claims remain. The penalties would have to be pretty stiff, of course.

Dragatus  [author] Jan 14, 2021 @ 9:28pm
@roselisesb I finally checked the mod, sorry it took so long. I didn't find any problems on my end though, it appears to be working fine. So I have no idea what might be causing the problem.
< >