Store Page
Tabletop Simulator>  Workshop > tokenterrors's Workshop
This item has been removed from the community because it violates Steam Community & Content Guidelines. It is only visible to you. If you believe your item has been removed by mistake, please contact Steam Support.
This item is incompatible with Tabletop Simulator. Please see the instructions page for reasons why this item might not work within Tabletop Simulator.
Current visibility: Hidden
This item will only be visible to you, admins, and anyone marked as a creator.
Current visibility: Friends-only
This item will only be visible in searches to you, your friends, and admins. 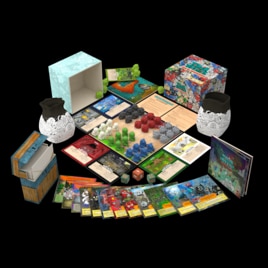 tokenterrors
Offline
See the collection (may be hidden)

This item has been added to your Subscriptions. Some games will require you to relaunch them before the item will be downloaded.
Description
Welcome to the Token Terrors Battlegrounds KS edition mod on Tabletop Simulator!

This mod features all factions from Token Terrors Season 1 PRIMEVAL, some content that was unlocked during our recent Kickstarter Campaign - GRUDGE and TACTICS cards, the Alpha versions of Token Terrors season 2 "TERROR RISING" and a Token Tyrant and Titan from our planned Season 1 expansion with the working title "PRIMEVAL POWER".

NOTES ON ADDED CONTENT - The Grudge, Tactics, Tyrants, Titans, and Season 2 lineup of factions are all in the Beta testing phase. All of this content has been playtested internally, we now need YOU to help us make it airtight =)

All this added content is for advanced players. We would kindly ask that before anyone dive into playing any of this content, you please play at least 3 games of Token Terrors using only the core rules and the Season 1 factions. With thanks =)

All rules from SN.1 PRIMEVAL apply here with the caveat that SN.2 Features a new kind of Token Talent called "REACT" Token Talents.

React Token Talents can be issued during your turn and during your opponent’s turn. REACT Talents happen immediately after being declared and interrupt Battles. The cost required to issue a REACT Talent change depending on whose turn it is.

YOUR TURN - Issue this talent as normal.
OPPONENTS TURN - Spend 2 Surge Points to issue this Talent.

In order to issue a React Token Talent during an opponent’s turn, you must meet these conditions -

The token with the React Talent must be on the Battleground and in the Fresh state.

You must have the required number of Surge points needed in order to issue the React Talent.

After the effect of the Talent concludes, continue the active players turn until their turn is over.

TOKEN TYRANTS
Tyrants are played exactly as normal Token Terrors - they are shaken up and dumped out at random, populate edge spaces when entering the Battleground, and give and receive Threat Bonuses from Tokens of the same faction. A Tyrant's starting Threat is equal to the number of spaces it occupies. If a Tyrant has the name of a typical faction in its name, it is a member of that faction and gives and receives threat bonuses from tokens of that faction. If a Tyrant does not have the name of a specific typical faction in its name it doesn’t give or receive threat bounces from that faction. For example Skirmish the GOBLIN War Boss has the word "goblin" in his name so he gives and receives Threat bonuses from adjacent friendly goblins.

TOKEN TITANS
Titanic tokens occupy four 1x1 inch squares, have a Threat of 4, and have 3 Token Talents instead of only 2. Titans Will always enter the Battleground during set up. If a Titan has the name of a typical faction in its name, it is a member of that faction and gives and receives threat bonuses from tokens of that faction. If a Titan does not have the name of a specific typical faction in its name it doesn’t give or receive threat bounces from that faction. For example The Graveliath, while working directly with Zombies does not have the word zombie in its name so it neither gains or recieves Threat bonuses from adjacent friendly zombies.

These are passive faction abilities that are added to the game provided that each opposing player commands factions that are sworn enemies. Grudge cards are placed with the base of the card in the center of either side of the battleground board in plain view. These abilities are only active if each player has at least 1 unit of the specified opposing factions on the Battleground. If either of teh Grudge effected factions are no on teh Battleground, the Grudge is no longer in play.

TERRIBLE TACTICS
Terrible Tactics is a 2 sided tile and 12 double-sided cards that provide rule additions for advanced players. The tactics tile is neutral on one side and active on the other. The Tile is placed neutral side up in the center space of the battleground. When in the neutral state (rolled up scroll) no player has mastery of tactics. Only one player may have Mastery of Tactics at any given time. There are 3 ways to gain mastery of Terrible Tactics

Capture- If a player moves their active Token on top of or over the Tactics Tile they have Mastery of Tactics. If the Tactics Tile is in the neutral state, flip it to the active side (open scroll with planted dagger). A token that remains on top of the Tactics Tile prevents their opponent from doing either of the other methods of claiming mastery for so long as they occupy that space and cover the tile.

Slaughter- If a player kills 2 enemies in the same turn they gain Mastery of Tactics but only if the Tactics tile is already active and your opponent doesn’t currently occupy the tactics tile.

Bribe - If you spend all 3 of your starting commands +1 Surge point you may claim Mastery of Tactics but only if the Tactics tile is already active and your opponent doesn’t currently occupy the tactics tile.


Once a player has MASTERY OF TACTICS they rotate the point of the planted blade towards themself to indicate this.

To anyone playing or who may have backed the campaign or is thinking about grabbing a copy of the game - THANK YOU!!! We hope you have a terribly good time.