Store Page
ARK: Survival Evolved>  Workshop > SamKO's Workshop
This item has been removed from the community because it violates Steam Community & Content Guidelines. It is only visible to you. If you believe your item has been removed by mistake, please contact Steam Support.
This item is incompatible with ARK: Survival Evolved. Please see the instructions page for reasons why this item might not work within ARK: Survival Evolved.
Current visibility: Hidden
This item will only be visible to you, admins, and anyone marked as a creator.
Current visibility: Friends-only
This item will only be visible in searches to you, your friends, and admins. 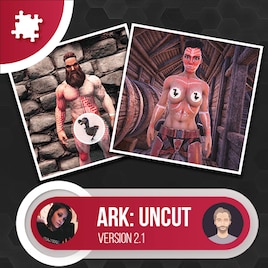 Rose
Offline
See all 574 collections (some may be hidden)

This item has been added to your Subscriptions. Some games will require you to relaunch them before the item will be downloaded.
Description
MOD ID:2203473621

IMPORTANT
-I want to inform everyone that I(Sam) will stop working on this mod, which means no new updates will be coming to this version of the mod.
-There will be a new version out sometime in the future under a new steam account and will start as a 1:1 copy of this mod, so switching the mods will be safe and no items will be lost.
-This version of the mod wont be removed any time soon, and once Rose makes the request to do so in the future, you will be getting a 2 week notice before that.

-Also I may start my own version of an Ark Nudity mod in the future but not any time soon as I lack the skills to create nice looking nude models to use and I don't own the ones used in this mod.

This mod uses the same character models as the original mod “ARK: Uncut (NSFW)” but uses a different approach in implementing them, solving many of the bugs and glitches the other mod had.

The former Dev could no longer fix these issues and glitches so I(Rose) had to find a new Dev to help continue work on this mod. Thankfully my good friend SamKO was willing to take over the mod and to actively fix issues as they are reported.

Refer to #ark-uncut-support for what to do if the mod gets disabled again by false reports.
Popular Discussions View All (4)

Rose  [author] Jan 19 @ 8:43am
Everyone, please look at our announcement in the discussion section for this mod.
We are in need of a new developer to help continue the development of this mod.
If you are someone who may be interested, please contact me directly here on discord: Rose#2012

CoolImmatureNatureBoy Jan 13 @ 2:46am
@ David Yeah that one is known issue. I reported about it on Lunar discord server on bug report channel . Happens on male character except on female .

David "TheDave" Eastwick Jan 12 @ 8:42pm
Having a tiny issue with this and the Steampunk mod armour, any way to do up my flies? My little guy is getting cold lol

Linky Nov 27, 2021 @ 4:28pm
I've had this mod since it was first introduced, and kept it ever since. If and when the two week-notice comes, is it necessary to join the Discord, or will there also be a message here on the workshop page?
< >