Store Page
Garry's Mod>  Workshop > Clamcy's Workshop
This item has been removed from the community because it violates Steam Community & Content Guidelines. It is only visible to you. If you believe your item has been removed by mistake, please contact Steam Support.
This item is incompatible with Garry's Mod. Please see the instructions page for reasons why this item might not work within Garry's Mod.
Current visibility: Hidden
This item will only be visible to you, admins, and anyone marked as a creator.
Current visibility: Friends-only
This item will only be visible in searches to you, your friends, and admins. 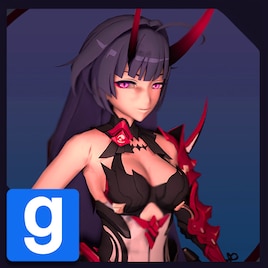 Clamcy
Online
See all 867 collections (some may be hidden)

This item has been added to your Subscriptions. Some games will require you to relaunch them before the item will be downloaded.
Description
Character Introduction:
Her father was originally the president of Massive Electric. When Mei was 15 years old, the company was deeply affected by the financial crisis, and her father was deeply mired in economic fraud (framed by Cocolia). At the end of the prison, almost all of the property was frozen.

This incident has had a major impact on Mei, and it has made her cheerful personality a bit solitary

Credit:
Me: Turning it into player model
R. Star?: For making the thumbnails :3
Shendiyu: Extracting the model from the game

❤Seele Stygian ❤ Jul 24 @ 8:39pm
i love it but can make it you can remove the stikes whats making her taller

Raiden Shogun May 26 @ 4:11am
Can you also upload Aqueous & Rainy Springtide Raiden Mei?