Store Page
Total War: WARHAMMER II>  Workshop > Juggernaut999's Workshop
This item has been removed from the community because it violates Steam Community & Content Guidelines. It is only visible to you. If you believe your item has been removed by mistake, please contact Steam Support.
This item is incompatible with Total War: WARHAMMER II. Please see the instructions page for reasons why this item might not work within Total War: WARHAMMER II.
Current visibility: Hidden
This item will only be visible to you, admins, and anyone marked as a creator.
Current visibility: Friends-only
This item will only be visible in searches to you, your friends, and admins. 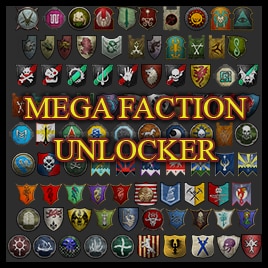 Juggernaut999
Offline
See all 303 collections (some may be hidden)

This item has been added to your Subscriptions. Some games will require you to relaunch them before the item will be downloaded.
Description
***UPDATED FOR THE SILENCE AND THE FURY DLC***

This mod makes most factions in Total War: Warhammer II playable in the Eye of the Vortex and Mortal Empires campaigns. This includes Rogue Armies and Pirates!

Rogue Armies: This mod makes Rogue Armies playable in the campaign, complete with their own unique technology tree!

SFO & Radious Compatible: Yes, this mod is fully compatible with SFO and Radious.

Vanilla Faithful: This mod makes minimal changes to Vanilla, none of which radically affect the Vanilla game balance.

The Mega Faction Unlocker is updated fairly regularly and can sometimes cause save files from the previous versions not to be compatible anymore, forcing players to start a new campaign. Use this link to find previous versions of the mod.

Q1) The mod does not work. Please help.

A) Check if any other mods you are using are causing problems. Most mods that modify the start_pos such as other faction unlockers (Crynsos's Faction Unlocker, Mixu's Unlocker) are generally not compatible with this mod.

Make sure the mod is enabled in the CA Launcher and is the first in the load order.

Q2) When I play some factions I cannot build or recruit anything.

A) Make sure you have the DLC Race Pack for those factions. Without the DLC all units and buildings from that particular race are locked and cannot be used even when playing Rogue Armies. To make use of all of the features of Mega Faction Unlocker you need to have all of the following DLC Race Packs:

Q3) I cannot see all of the factions in Multiplayer Campaign.

A) Reduce the UI scale in the Graphics Settings (to about 60-70%). This will allow you to see all of the factions in the drop down menu. Once you start the campaign you can then revert back to the original UI scale.

Q4) Do you plan to make x faction playable?

A) I do plan to try and make as many factions playable in some way or another as possible and to create some custom factions of my own. At some point, however, I will no longer expand the faction roster. Even now there's a ton of factions to play around with.

A) Unless the mod you speak of is SFO, no. It is up to the other author to make their mod compatible with this one. I only provide the unlocker.

Q6) The game crashes when I try to select a faction for Mortal Empires multiplayer campaign. Can you fix it?

A) To avoid this crash make sure you've lowered the UI scale in the graphics settings to 50-60%. The crash itself isn't the result of a bug, it's merely the result of the game being pushed to its limits given the enormous faction roster.

Special thanks to Crynsos for the Norscan Gods scripts as well as his amazing faction unlock tutorial, and to Mixu for the Vampire Coast Mutineers infamy and Empire Politics scripts. Also thanks to Cryswar for his awesome tutorial on creating custom factions, and to prop joe whose Console Commands mod has been massively helpful for the development of this mod.

If this unlocker mod does not suit your fancy, you can try these:

I'm currently working on a total overhaul mod which is meant to change and improve every gameplay aspect of Warhammer and will also serve as a continuation of Mega Faction Unlocker.

You can try out the mod and/or joining its testing and development by joining my Discord Server:

InfoManiac May 7 @ 12:58pm
Tilea doesnt have their bonus strategic location building on Miragliano

Ano May 4 @ 6:01pm
damn clan fester is living in shambles

InfoManiac May 1 @ 1:26pm
@serchant no traits but everything else has made them playable. They work exactly the same as normal factions except they dont have a legendary lord faction trait.

Serchant Apr 11 @ 11:09am
Do the other minor factions have traits etc?

I'm waiting until Warhammer 3 is in an actually worthwhile, decent state. Currently I'm working on the next iteration of this mod, its evolution so to speak, for Warhammer 2.

1509ARL Apr 7 @ 5:33pm
I gotta say being able to play as a rouge army is amazing! I also thinks its really cool that they can decide to function as normal armies (removing the infighting penalty and horde construction) if they so choose simply by capturing a settlement

Tijuana Apr 6 @ 4:33am
Any Plan to make this available for WH3 in the near future? Or will you be waiting for Mortal Empires release?

I'm currently working on a total overhaul mod which is meant to change and improve every gameplay aspect of Warhammer and will also serve as a continuation of Mega Faction Unlocker.

You can try out the mod and/or joining its testing and development by joining my Discord Server: