Store Page
Stellaris>  Workshop > fallenrepublicswfr's Workshop
This item has been removed from the community because it violates Steam Community & Content Guidelines. It is only visible to you. If you believe your item has been removed by mistake, please contact Steam Support.
This item is incompatible with Stellaris. Please see the instructions page for reasons why this item might not work within Stellaris.
Current visibility: Hidden
This item will only be visible to you, admins, and anyone marked as a creator.
Current visibility: Friends-only
This item will only be visible in searches to you, your friends, and admins. 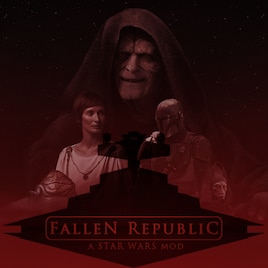 This item has been added to your Subscriptions. Some games will require you to relaunch them before the item will be downloaded.
In 1 collection by fallenrepublicswfr
Star Wars: Fallen Republic / Submods

Star Wars: Fallen Republic is a total conversion mod designed to bring the Star Wars experience to Stellaris complete with ancient secrets, epic space battles, and political intrigue. With numerous potential starting maps and over forty playable empires to pick from, you will take the reigns of your empire of choice and lead them from the very start of the Galactic Civil War to the Battle of Endor and beyond.

Will you follow the path laid out by destiny or will you take matters into your own hands?

Join the Team:
We are always looking for new individuals to contribute their talents to the mod. Some associated skills needed to join the team, depending on the area you wish to contribute, might be a basic knowledge of coding, sound design, 3-D model making, 2-D illustration (concept art, pixel art, etc), or bilingualism. If you have any of these skills or skills related to the aforementioned, check the addendum for a link to the application.

ShadowSheepCZ 7 hours ago
he even star trek update in New Horizon is not like before, but at least it sticks to the current version of the game.
Thanks, I'll check out New Dawn.

The_Stealth_Dude 14 hours ago
According to the discord, the team behind this mod are currently working on an update, but the team is tiny, so its taking some time.

ShadowSheepCZ 20 hours ago
The mod is dead? No update came out, can't run on updated Stellaris will any update come out at all? It would be a shame if all the work on the mod was for nothing. :(

SVaughan May 26 @ 4:38pm
@Vicman
The mod is essentially abandoned right now, so what do you think? No. It won't be fixed.

Vicman May 26 @ 11:51am
The starports are insanely strong, are you going to fix it? thanks

lol, yea. It was the perfect name when I used to play chivalry all the time.