Greenlight > Games > 10x10 Room's Workshop
Greenlight is being retired. For more information on how to submit games to steam, refer to this blog post.
This item has been removed from the community because it violates Steam Community & Content Guidelines. It is only visible to you. If you believe your item has been removed by mistake, please contact Steam Support.
This item is incompatible with Greenlight. Please see the instructions page for reasons why this item might not work within Greenlight.
Current visibility: Hidden
This item will only be visible to you, admins, and anyone marked as a creator.
Current visibility: Friends-only
This item will only be visible in searches to you, your friends, and admins.
Conclave
Description Discussions7 Announcements9 Comments204 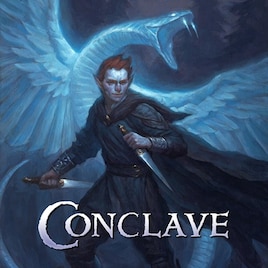 10x10 Room
Offline
See all 18 collections (some may be hidden)

View Conclave in the store

Thanks to all of you for your patience. We know it's been a very long wait, and we can't tell you how glad we are to finally be able to share the game with you. We hope you'll check it out and enjoy.

As you've no doubt seen if you've looked at its page, Conclave was just Greenlit! Thanks to all of you who've supported us, whether that's with votes, constructive feedback, or taking a flyer on the game.

We'll share more details as we have them. In the meantime, there's some SteamWorks documentation that's calling our names ...

Read More
Description
Release date: Available now for Windows, Mac, Linux, and your browser!
Conclave is an online RPG in the style of classic tabletop roleplaying campaigns. It supports both solo play and co-op parties of up to four players, who can adventure together in real time or take their turns separately whenever they have a free moment.

To play through your browser, visit https://www.playconclave.com/.
To download the desktop client, visit the Downloads page[www.playconclave.com].
The game's initial campaign of adventures, Legacy of the Dweller, is set in and around the eponymous Conclave, last refuge of the five races of the Kin. The story begins with the unexpected return of a long-vanished Dreamcaller and leads to the discovery of an ageless secret locked within the heart of the Conclave itself.

The campaign includes 25 quests, each with several turn-based combat encounters and story-influencing party decisions. In combat, players must use tactics that take advantage of their characters' abilities and the special qualities of each encounter's battlemap to defeat their foes. During story decisions, players choose from options unlocked by their characters' skills and previous decisions.

Character archetypes include the Vanguard, Beacon, Rogue, True Bow, and Runecaster, and playable races include the Trow, Nix, Mezoar, Lumyn, and Forgeborn. As characters gain levels, players can customize them further from a list of over 100 abilities. The game also includes over 125 items that characters can select from the Conclave's Vault of Arms or find during their adventures.

"Combines all the best things about D&D that I love." -- Wired
For more information about the game, visit https://www.playconclave.com/.

Conclave is the work of the two-person team of 10x10 Room, with additional artistic and musical contributions from Chris Rahn, Devin Night, Christina Roberts, and Sam Hulick. Following our successful Kickstarter in 2012, we released the browser version of Conclave in 2013 and have continued to improve and expand it since then. We'd love to bring it to Steam if you give us your vote. Thanks!
Popular Discussions View All (7)

What are the plans for mods and community modules?
Hawthorn
< >
204 Comments

Vombato Sep 28, 2014 @ 12:13pm
I'm currently playing the free browser version with my roommate, and I'm having a great time. The graphics are atmospheric in their own right and the story and gameplay are very engaging. The one downside I can see is the limited content, but I'm confident that with more support the developers will be able to deliver on that part as well. Huge thumbs up!

garyakelley Sep 16, 2014 @ 12:26am
I'd like to see more. But I think it could do well lack of graphics is eh but the game play itself seems pretty interesting.

raulpuro Aug 30, 2014 @ 8:23pm
I voted the game is very interesting is a sentence that is not in Spanish but I like this style of game, good luck.

Conclave has been Greenlit and is now listed in the Steam store. For the latest information, purchase options, and discussions for Conclave, please see it on the Steam Store or in the Steam Community.
Visit Store Page
For more details Visit Community Hub
For latest discussions
If you really, really want to, you can continue to the Greenlight page. Information on this page may be out of date, since all the action has moved to the areas noted above.