Greenlight > Games > Sneaky Games's Workshop
Greenlight is being retired. For more information on how to submit games to steam, refer to this blog post.
This item has been removed from the community because it violates Steam Community & Content Guidelines. It is only visible to you. If you believe your item has been removed by mistake, please contact Steam Support.
This item is incompatible with Greenlight. Please see the instructions page for reasons why this item might not work within Greenlight.
Current visibility: Hidden
This item will only be visible to you, admins, and anyone marked as a creator.
Current visibility: Friends-only
This item will only be visible in searches to you, your friends, and admins.
Arena of Heroes
Description Discussions9 Announcements7 Comments173 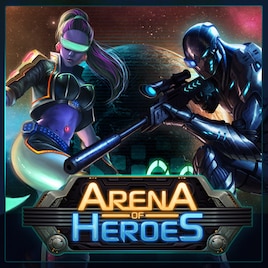 Sneaky Games
Offline
See all 23 collections (some may be hidden)
Recent Announcements View All (7)
Arena of Heroes is now on Facebook!
April 29, 2014 - Sneaky Games

Arena of Heroes has reached its 8th platform, Facebook! https://apps.facebook.com/arenaofheroes/

We're excited to announce that you and your friends can now show your tactical domination within Facebook, for FREE! This brings our total platforms to 8, and we have another in the works. Our 9th will be on Windows Surface/Phone.

Steam would be a dream come true as our 10th platform, so please let everyone know we want to get Greenlight!

And, as always, thanks for your support!

Arena of Heroes releases on the web! Here: http://www.arenaofheroes.com/game

We are excited to announce that Arena of Heroes can now be played in your web-browser!

You can play the same Arena of Heroes from PC/Mac/iOS/Android/Linux anywhere you have a web-browser! It's right here on our website: http://arenaofheroes.com/game ! And, just like all the rest of the platforms Arena of Heroes is on, your account is shared and transfers wherever you play. So, no matter where you are you can make progress on your account!

Primarily, our excitement is generated from our ability to expand Arena of Heroes' Cross-Platform feature even further. We've now gone to the web-browser, and hope that players find this new location really convenient and easy to find. Unity has been an amazing boon developing this game. The vision for it to be a (fully) cross-platform experience has been bolstered by this latest update. The web-browser client marks our 7th fully supported platform!

Read More
Description
Release date: Play Now -> https://www.arenaofheroes.com/intro-download
https://www.arenaofheroes.com (Free-to-Play)
Collect your Heroes and lead them to victory in the intergalactic Turn-Based battle arena! Play in Realtime or Asynchronous modes against your friends and foes, or test your tactics against the A.I. in fierce single-player modes. If you are up to the challenge... climb the PVP Ranks to become a champion of the Arena!

Arena of Heroes is 100% Free-to-Play and currently available on PC, Mac, iPhone, and iPad. Soon, within a few short weeks, we’ll also be hosted on the Web (Facebook, Kongregate, Google+, etc.) as well as Android, and eventually on the Windows Surface and Phone. And so, your account and games can be transferred between any of these devices seamlessly, and even mid-battle if you prefer.

Now it's your turn! Download and begin your tactical domination NOW! http://arenaofheroes.com/intro-download/

"Each skirmish in Arena of Heroes, much like each skirmish in other MOBAs, is a race to destroy the rival team’s tower. Drones are produced for both sides on each turn and automatically make their way through one of the three available lanes, attacking anything that isn’t on their side that gets into range. They pretty much serve as fodder/distractions; the heroes are what really matter. Each match requires a team of four and, of course, each offers their own unique skills. They also level up independently as the match progresses and can upgrade their special skills accordingly. And as expected it’s also very likely (and almost guaranteed) for a hero to fall during a match, putting them out of the game for a turn or round rather than a set number of seconds because it’s not real time." -148apps.com

"As it stands, the game's system works wonderfully..." Gamezebo

“Arena of Heroes is perfect for players without a lot of time to invest.” – Kotaku

"For a gamer who has lots of other games and responsibilities in his life, it's hard to say no to such a fun little package..." - Massively

"Arena of Heroes does a good job of presenting MOBAs in a new light." -148apps

"I was blown away by how easy Arena of Heroes is to pick up and how much fun it is to try to master." -freewebgame360

Silentstrike46 Jan 6, 2015 @ 2:08pm
Is this game dead? No videos, and no website. If they are still making this game, they need to get their act together!

Der Falscher Dec 2, 2014 @ 8:44pm
"Videos do not exist" and on top of that the official website isn't valid. I tried to gather some info on this game for a few days now and all points towards an abandonned project. I hope it's not what it looks like.

猫|タ Arikayon® Sep 23, 2014 @ 2:44am
well it seems the game is dead ... website down since a while / no log in to game also / no comments on there facebooksite since months and even the website of sneaky games itself isnt avaible anymore o.O