Store Page
X4: Foundations>  Workshop > Axeface's Workshop
This item has been removed from the community because it violates Steam Community & Content Guidelines. It is only visible to you. If you believe your item has been removed by mistake, please contact Steam Support.
This item is incompatible with X4: Foundations. Please see the instructions page for reasons why this item might not work within X4: Foundations.
Current visibility: Hidden
This item will only be visible to you, admins, and anyone marked as a creator.
Current visibility: Friends-only
This item will only be visible in searches to you, your friends, and admins. 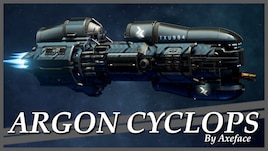 Axeface
Offline
See all 57 collections (some may be hidden)

This item has been added to your Subscriptions. Some games will require you to relaunch them before the item will be downloaded.
Description
ARGON CYCLOPS
This mod adds a new frigate to Argon shipyards, the Cyclops. When starting this project my aim was to make an updated design of the Argon Centaur from X3, taking design cues from it while updating it for X4's Argon aesthetic.

"Fondly referred to as the 'Centaur II' by its captains due to a close resemblance to archaic Argon designs, the Cyclops was developed as a response to increasing Xenon fighter swarm activity. Sporting excellent speed for its size and bristling with tightly grouped anti-fighter turret systems it is an effective anti-fighter escort for larger capital ships. It's speed also makes the Cyclops perfect for exploration and reconnaissance activities and it has therefore become the go-to vessel for Argon secret service operations."

The ship is designed as a fast anti-fighter capital ship and weighs in at around 1/3 the size of a Behemoth. While it is designed for anti-fighter activities and exploration, in skilled hands it is more than capable of running rings around dangerous enemies such as the Xenon K (literally).

I have added the ship to the Argon faction so you may see 1 or 2 of them flying around on patrol.


FAQ!
Q. VRO compatible?
A. This ship in included in VRO's latest update.

Q. How much has your life expectancy been reduced due to the stress of hammering this ship out?
A. Current approximates are around 8 years struck off.


Thank you to everyone at the Egosoft forums for help during the creation of this mod and for answering my neverending questions. Special thanks to BrummBear02 for his tutorials and assistance, and SirFrancisDrake, Shuulo and LinolaFett also. And Thanks to Egosoft for the X games! Any news on some official tools to make this process easier would be very much appreciated, its been quite a struggle.
Credit must be given to Egosofts artists too for their great ship models, much of this model was kitbashed from vanilla ships - great work and thanks!

Donations
I spend a lot of time and effort making mods, they are of course FREE but if you like what I do and feel like showing your appreciation with a donation you can do so through Paypal[www.paypal.com] via mjfaraldo@gmail.com. Thank you.


NB - This mod isnt to be modified, copied or uploaded anywhere else without my express permission. Permission has been given to Shuulo to include this ship in VRO.
< >
109 Comments

snacker Aug 24 @ 9:31am
Hoping someone remakes the boreas but this ship is nice.

Raith Aug 21 @ 2:14am
A replaceable main gun would be useful, I find the Terran more effective

Glorfy Jun 2 @ 5:57am
Does anyone else think the ship is placed too low from the camera when piloting in 3rd person? It gets completely covered by the radar for me- it's way lower from the center of the screen than similarly-sized ships.

Is this something that can adjusted in the files or could it be tied to the model? Maybe I'm crazy?

Mad_Marx Apr 22 @ 6:29pm
Have any spoilers for the other three ships you're working with?

Axeface  [author] Apr 7 @ 8:03am
@Cacharadon You'de have to make a mod probably editing the falx macro file. M ships are far more complex than L and XL though and i think you'de need to carefully copy over many items from the katana, like the switches, seats etc.

Cacharadon Mar 31 @ 10:48pm
@Cythal Did it work? @Axeface Is there a way to select a specific cockpit connection? I want to mod the Falx cockpit to look like the Katana, but cant figure out what it's called