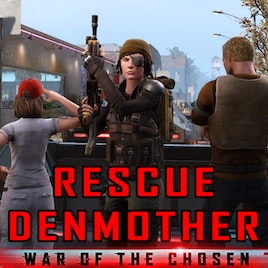 XCOM 2: War of the Chosen
Required items
This item requires all of the following other items
X2WOTCCommunityHighlander
Empty WOTC Deco Slots for XCOM Soldiers (+ Some other empty things)
Created by

Kexx
Online
See all 134 collections (some may be hidden)
You need DLC to use this item.

This item has been added to your Subscriptions. Some games will require you to relaunch them before the item will be downloaded.
Description
Allows to rescue Denmother from the first retaliation mission of the campaign and have her join your crew as a soldier. When you deploy on the mission, Denmother will be bleeding out somewhere in the middle of the map, and it's up to you to stabilize, evac her or kill all enemies before she bleeds out. You get 8 turns to do so.

If you manage to keep her alive, she will join your crew as a regular soldier. She does not have a custom character template, so once you get her, you can customize her however you like.

COSMETICS
Included into this mod are: Denmother's torso with tactical gear, arms with shoulder plates, legs with ammo pouches, backpack and a beanie. All cosmetics are done by Kexx.
These cosmetics should not appear on randomly generated soldiers, but you can equip them on any female soldier manually.
You can also edit the mod's config to add her torso and tactical gear separately.
The in-game cosmetics are not a perfect mirror of what you see in the cinematic, but it's close enough to be recognizable.

Denmother herself also gains an additional flavor perk: One Good Eye - works similarly to Zero In, but resets only when switching targets.

Rookies will not be randomly promoted to the Keeper class. To be able to train Rookies to Keepers in GTS, you have to promote a Keeper (so, Denmother) to a Captain and then purchase an unlock in GTS for 50 Supplies. Doing so will also grant Steady Aim perk to all Keepers.

This class is pretty basic and could have been way more fancy, but I wanted to make the mod quickly, and the custom soldier class is mostly a flavor thing.

MARKSMAN CARBINE
This Assault Rifle will be equipped on Denmother when she joins your crew. Or the weapon will be added to Avenger's inventory if she dies on the retaliation mission and you recover Denmother's body or kill all enemies.

Marksman Carbine deals the same base damage as a Magnetic Rifle, and has +1 Magazine Size. However, it deals only +1 damage on critical strikes and its critical chance is reduced by 20%. All of this to provide an incentive of using this weapon more for Overwatch rather than for flank shots on some other class.

You can equip this weapon on any other soldier, if you want. You will have only this one Marksman Carbine, you cannot produce any more. It is intended to be unique.

Compatible will all the standard weapon upgrades and has 2 upgrade slots.
It will be converted into a regular Plasma Rifle when you purchase the Plasma Rifle upgrade schematic.

REQUIREMENTS
The mod does not require a new campaign start, but for obvious reasons adding it after the first retaliation mission is pointless.

X2WOTCCommunityHighlander v1.21 or higher is required.
Empty WOTC Deco Slots for XCOM Soldiers (+ Some other empty things) is required, unless you play with Unrestricted Customization - Wotc.

The only part of the mod that requires specifically the v1.21 of the Highlander is being able to train additional Keepers in GTS after purchasing their GTS unlock. If you don't care about that, you can use the mod with any Highlander v1.18 or above.

INCOMPTABILE MODS
[WOTC] Only Haven Assaults - somewhat INCOMPATIBLE. When you kill the first half of enemies on your first Haven Assault, Denmother will be automatically stabilized and evacuated for you. This is not really intended behavior. You can imagine that she was dragged off to a first aid tent by the freed resistance personnel or something like that. The mod should work correctly after that point, and Denmother will still join your crew, although you will always get the bad backstory that her family was killed.

COMPANION MODS
[WotC] Infirmaria Ex Mortis - if Denmother dies on the retaliation mission, you should be able to bring her back to life in the Infirmary, as long as you recover her body by evacuating it or killing all enemies on the map.

[WOTC] Iridar's Underbarrel Attachments - the Marksman Carbine has a unique Underbarrel Grenade Launcher model. It will also replace the appearance of all underbarrel attachments, but you're not really meant to be able to equip them on this weapon anyway.

Please support me on Patreon[www.patreon.com] if you require tech support, have a suggestion for a feature, or simply wish to help me create more awesome mods.
< >
119 Comments

ImLinkn Nov 26, 2020 @ 3:49pm
@Iridar Apologize if this was already asked in the comments but how do you tie this mod with SWR Not Created Equal WotC ?

Ivan Ivanovich Nov 22, 2020 @ 12:15am
Indeed, the issue was on my side. I overlooked the "Community Highlander" requirement.

Now, I've been really enjoying the new character and a new class. Thank you! Love the attention to detail and extra lore to the character.

hoppingvampire Nov 14, 2020 @ 2:07am
I dont think this mod is compatible the the Creative Xenos Hive mod. first retaliation mission crashes to desktop, probably because the edit the same mission.

Ivan Ivanovich Nov 9, 2020 @ 5:20pm
I will restart the campaign and let you know if it was my fault. Once again, I usually don't ignore the required mods. No idea how I've missed it.

Thanks for a quick response and for the quality content you provide. God bless.

Ivan Ivanovich Nov 9, 2020 @ 4:42pm
I've completed the mission in 7 turns, yet Denmother always dies. Reloaded the map multiple times and she is no where to be seen (physically spawning on the mission). I did not have CommunityHighlander installed, no idea if it was added later or if I missed it.
Is that the issue? Would be a shame to restart the campaign again. Nontheless, I love the cosmetic items.

Iridar  [author] Oct 31, 2020 @ 10:39am
@WelfareRecipient
I'll look into making it configurable and vary depending on difficulty, but it's low priority.

WelfareRecipient Oct 31, 2020 @ 10:24am
Not sure if you're aware but the GTS skill for the Keeper class only costs 50 in Legend, making it much cheaper than the GTS skill for the default classes (200 supplies). Can this be fixed? Otherwise this mod is so far pretty fantastic and the class is a nice boost in the early game. Combat Presence might be a little too OP as a squadie perk.
< >