Store Page
Ravenfield>  Workshop > Os_omoafetivo's Workshop
This item has been removed from the community because it violates Steam Community & Content Guidelines. It is only visible to you. If you believe your item has been removed by mistake, please contact Steam Support.
This item is incompatible with Ravenfield. Please see the instructions page for reasons why this item might not work within Ravenfield.
Current visibility: Hidden
This item will only be visible to you, admins, and anyone marked as a creator.
Current visibility: Friends-only
This item will only be visible in searches to you, your friends, and admins. 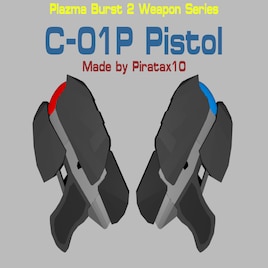 Os_omoafetivo
Offline
See all 6 collections (some may be hidden)

This item has been added to your Subscriptions. Some games will require you to relaunch them before the item will be downloaded.
Description
My first ravenfield mod and successful attempt at 3D modeling, these guys are based on the guns with the same name in the game “Plazma Burst 2” (www.plazmaburst2.com), as it is my first mod, they aren’t perfect, but can be enjoyable.

The C-01p is a pistol with high damage laser blasts and high rate of fire, but its main downside is the fact that it has no sights of any type, so it isn’t recommended to use this pistol as a replacement for a long-ranged gun…

I am probably going to expand this series of weapons, and I also plan on making more mods based on games that aren’t that well known, so stay tuned!

Note: Plazma Burst 2 was developed by Eric Gurt and Coolbuddy.com, this is only a fan-project. Thanks for reading!

Note 2: Piratax10 is my main username, hence the reason it is on the thumbnail (no, the user called Piratax10 on steam isn't me).
< >
30 Comments

Os_omoafetivo  [author] Feb 25 @ 4:14pm
im really sorry for everyone who has been hyped for the c-01r that i kept waiting, my life is getting worse in real life, it's getting hard to keep up the motivation, but i will someday return to blender and finish that project, maybe if i start with simpler guns such as the alien rifle i may get motivated again? who knows...

󠀡󠀡󠀡󠀡Jellygato Oct 1, 2020 @ 6:45pm
holy shet, this gave me good and bad memories of how good and terrible the game was lol

DeclanFrost Sep 30, 2020 @ 11:42am
I never expected this game to make an appearance in RF's mods. But I'm not questioning it because this is cool asf