Store Page
ARK: Survival Evolved>  Workshop > Javelin's Workshop
This item has been removed from the community because it violates Steam Community & Content Guidelines. It is only visible to you. If you believe your item has been removed by mistake, please contact Steam Support.
This item is incompatible with ARK: Survival Evolved. Please see the instructions page for reasons why this item might not work within ARK: Survival Evolved.
Current visibility: Hidden
This item will only be visible to you, admins, and anyone marked as a creator.
Current visibility: Friends-only
This item will only be visible in searches to you, your friends, and admins. 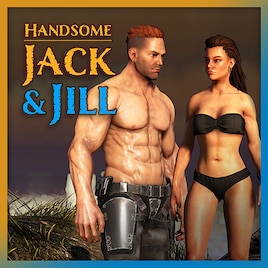 Javelin
Online
See all 2184 collections (some may be hidden)

This item has been added to your Subscriptions. Some games will require you to relaunch them before the item will be downloaded.
Description
Replaces the male and female base character with a fully functional alternative character mesh.
LAUNCHED Aug 2nd, after releasing Handsome Jack I got a lot of requests to revamp the female. So I did. You will find she has a new face, slightly more feminine body proportions, light touch of makeup and all of the female beard customizations have been replaced with an assortment of ear and facial piercings. She has been re-textured to match the quality of handsome jack and now uses the same skin and eye shader as him. A lot of her hair shapes were also addressed.

Handsome Jack also got a little love, he now has 3 additional facial customizations that are beard / piercing combos as well as an additional haircut.

READ THE F.A.Q. AT BOTTOM BEFORE DOWNLOADING
ATTENTION NITRADO & HAVOC USERS *UPDATE*
This mod will not work with Nitrado or any host who has not yet updated their systems to use 64 bit strings. This is not a problem with the mod it is a problem with their backend system they use to automate mod installations. If you haven't yet chosen a host our users recommend arkservers.io as the installation is super easy, just drag jack and jill to the top of the list and they are affordable. (I am not sponsored by them or anything).

Load Order: MOD must be loaded first in priority, no exceptions. It must be the first mod loaded in order to grab the player pawn.

Servers: Put first in line in the "activemods" area of the servers config GameUserSettings.ini file.

Single Player: Put at the top of your mod list, may need to remove all other mods, add it and then re-add your mods before launching.

MOD REMOVAL
Be sure to empty your inventory and weapon slots before removing the mod. It will revert your pawn and will be equivalent to dieing only there will be no bag to retrieve your stuff.

F.A.Q.
Q. The mod isn't working.
A. Make sure the mod is first in the list of active mods, in single player it must be at the top and for servers it must come first in the list of active mods housed in the GameUserSettings.ini file. If another mod requires a high priority you can try loading theirs second but this mod must be first in order to grab the player pawn, no exceptions.

Q. The mod is installed correctly but I still look like the old character.
A. The game will not update the character pawn until you respawn, you must die to activate the new mesh.

Q. It grabbed the new mesh but I don't look like the handsome jack in the photos.
A. If you made your character look silly, you will still look silly. All of your customization choices transfer to the new mesh along with all of your game progress. There are two ways to reset this, admin commands or creating a new survivor. Admin Commands for resetting the body regions found here: https://ark.gamepedia.com/Body_Regions.

Q. I installed the mod but my server doesn't start.
A. This could be caused by a conflict with another mod that touches the character pawn. The tip off should be if you had to load a mod first in order, if that was a requirement to install it then it likely changes some values in the character pawn, this is typical in some dino revamp mods, I.E. they changed xp values etc. You will need to uninstall that mod *before* you install Jack & Jill if you want a smooth installation.

Q. I can't get it to install on "X" host (havoc / nitrado etc)
A. It's been reported that some hosts are having difficulties lately with "any" newly released mod. This may be a result of a recent issue that Wildcard is aware of where IDs exceeding the int32 max are causing problems. But it could be something on the hosts end as well. Nothing I can do for this as it's not a problem with the mod itself, I recommend reaching out to your host. Gameservers.com and Gportal appear to work fine.
Popular Discussions View All (13)

Rose Jan 5 @ 7:31am
I have noticed many requests for a "Nude" version of this mod.
Well, I do not believe based on the comments the author has made that he plans to make this "Nude" version or even update this one at all unless someone takesover.

Well, I had a high quality nude mod that makes naturalism look old-school.
Higher quality textures and customized bodies to look a little better "in many peoples opinions including my own" - I'm not asking anyone to stop using this mod for mine, but I have seen people ask for a higher quality nude mod for quite some time now... and there is one that not everyone knows about "obviously" go checkout here on the ARK workshop the mod called "ARK Uncut 2.1 (NSFW) and if a nude mod is what you're looking for, thats exactly what you will get.

RidleyLongnose Dec 31, 2021 @ 3:54pm
It seems that there might be a glitch with the characters not using the Canoe correctly when mounted. The character appears frozen in place in a standing position ( aside from the head turning ). The paddle also freezes and does not move. When you go into first person then you can see the paddle moving but in third person they appear to be bugged.

Velvian Dec 19, 2021 @ 7:46am
thank you for the answer but unfortunately you are right because, after testing, it is one or the other but not both.
That's okay, I'll all even use yours, and damn for the HUD.

Javelin  [author] Dec 13, 2021 @ 12:39am
@Velvian you can experiment and see if loading his mod or my mod second works but unfortunately there's no way to know for sure. The reason mine has to be first is because characters are one of the first things loaded so often if its not first the default ends up getting loaded instead. This isn't something I have control over it's just how wildcard coded the game.

Velvian Dec 2, 2021 @ 4:46pm
Hello. I like your mod, but I have a rather logical problem, I also like another mod that changes the HUD icons for hunger, thirst, and the like. The thing is, this mod also needs to be loaded first, so how can I combine yours and another mod that needs to be placed first in the mod list?

OneArmedBilly Oct 28, 2021 @ 1:09pm
Anyone have issues with costumes and the like not working? some do, others just make me a pair of eyeballs or completely invisible.

Javelin  [author] Oct 18, 2021 @ 9:55am
That's not exactly what I meant Anthologie. There is 1 modder who is rolling this mod into his cosplay creator mod and will be, I assume fixing the bugs that have popped up with the updates. He will probably post here when it's out.
< >