Greenlight > Games > Nyu Media's Workshop
Greenlight is being retired. For more information on how to submit games to steam, refer to this blog post.
This item has been removed from the community because it violates Steam Community & Content Guidelines. It is only visible to you. If you believe your item has been removed by mistake, please contact Steam Support.
This item is incompatible with Greenlight. Please see the instructions page for reasons why this item might not work within Greenlight.
Current visibility: Hidden
This item will only be visible to you, admins, and anyone marked as a creator.
Current visibility: Friends-only
This item will only be visible in searches to you, your friends, and admins.
GIGANTIC ARMY
Description Discussions5 Announcements6 Comments321 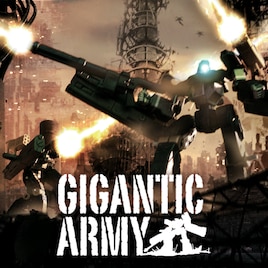 Harrison Lewis
Offline
See all 46 collections (some may be hidden)

View GIGANTIC ARMY in the store

The fifth game in ASTRO PORT’s ASTRO SAGA series, STEEL STRIDER, is now listed for approval and in need of YOUR vote on Steam Greenlight!

STEEL STRIDER is the follow up to GIGANTIC ARMY and pays homage to the great run and gun games such as Turrican and Super Contra, but with mouse / dual analogue stick-operated weapons. It also contains many nods, winks, and cameos from other ASTRO PORT games, so fans of the series should particularly enjoy this installment :)

We would love to bring this game to Steam, but we have to pass Steam Greenlight first! Please take a moment to vote YES at the below link and bring STEEL STRIDER to Steam!

On behalf of everyone at Nyu Media & ASTRO PORT, THANK YOU!

We’re extremely pleased to announce that GIGANTIC ARMY is available to download from Steam right now!

This is the most expansive version yet, equipped with 42 achievements, Steam Trading Cards, Linux version support and two awesome physical items: a printable retro-style DVD case insert and a printable CD/DVD label. These goodies allow you to create your very own GIGANTIC ARMY game box in the style of SNES packaging – a cheeky nod to the classic Cybernator!

If you have already purchased GIGANTIC ARMY you will receive a free Steam key so that you too can enjoy the expanded Steam version.

Thanks to everyone that has supported GIGANTIC ARMY this far. Your enthusiasm has been overwhelming!

FOR YOUR CONSIDERATION
GIGANTIC ARMY is a heartfelt homage to 16-bit era mech shooters such as Cybernator / Assault Suits Valken, Metal Warriors, and Front Mission: Gun Hazard, developed by the studio behind the acclaimed shooter SATAZIUS.

The demo version is available NOW at http://GIGANTICARMY.com - please check it out and vote YES for GIGANTIC ARMY to help us further expand and distribute this game on Steam!

Overview:
It is the 21st century and Earth is at war with the Ramulons – an alien race determined to stop humanity’s advance into space.

Mankind’s war against the Ramulons has reached the planet Ramulon itself and it is now down to YOU to pilot the ‘GMR-34 SALADIN’ - a Manned Combat Robot - and take on the Ramulon army. Customize your arsenal of explosive, projectile and plasma weapons, and combine them with melee attacks, thrusters and shield to take the fight to the enemy and end the conflict!

Features:
• Six stages of intense mech-shooting action!
• Twelve mid and end level bosses of gargantuan proportions to take down!
• Four difficulty modes from ‘Easy’ to ‘Insane’ to cater for all skill levels!
• Customizable weapons load-out to suit your play style!
• Dash, thrusters and shield give your mech satisfying maneuverability and defensive options!
• Rebalanced gameplay from the original Japanese version!
• The Steam version will add 42 achievements, trading cards, and more! A Linux version is also in the works!
• Outstanding value: only $5.99!!

On behalf of everyone at Nyu Media and ASTRO PORT, THANK YOU!

BlackMoonWolf Sep 21, 2014 @ 1:23am
Man... This looks like the gameplay was stripped straight out of Cybernator. The similarity is incredibly striking. Feels like I'm watching a sequel here.

But it looks good and seems fun so we'll give it a go.

GIGANTIC ARMY has been Greenlit and is now listed in the Steam store. For the latest information, purchase options, and discussions for GIGANTIC ARMY, please see it on the Steam Store or in the Steam Community.
Visit Store Page
For more details Visit Community Hub
For latest discussions
If you really, really want to, you can continue to the Greenlight page. Information on this page may be out of date, since all the action has moved to the areas noted above.