Store Page
Hearts of Iron IV>  Workshop > MnCnNn's Workshop
This item has been removed from the community because it violates Steam Community & Content Guidelines. It is only visible to you. If you believe your item has been removed by mistake, please contact Steam Support.
This item is incompatible with Hearts of Iron IV. Please see the instructions page for reasons why this item might not work within Hearts of Iron IV.
Current visibility: Hidden
This item will only be visible to you, admins, and anyone marked as a creator.
Current visibility: Friends-only
This item will only be visible in searches to you, your friends, and admins. 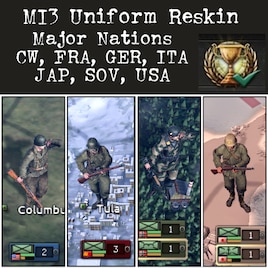 This item has been added to your Subscriptions. Some games will require you to relaunch them before the item will be downloaded.
In 1 collection by MnCnNn
MI3 - Compatible mods

13 items
Description
MI3 is basically taking MI2 and streamlining it into three mods.

Included in this Mod
This mod MI3 Majors is the base mod, containing steamlined graphics for land units (excluding tanks) for the following nations.

It also has some extremely minor nations that differ significantly from their base generic tag.
Tibet (TIB), Haiti (HAI), Dominican Republic (DOM)

What the mod does
Basically, this mod is about 30% lighter in graphics, hopefully speeding up load times for users significantly (over 150mb saved). I have edited the files to remove unnecessary small details to streamline things and save hundreds of megabytes. While load times should be significantly faster, you should really not notice much, if any, difference between MI3 and MI2 (other than better performance).

These three mods will (when released) replace all of my other MI and MI2 mods, as it will be a lot easier to update 3 mods than 20+.

Requirements
This mod is totally standalone, does NOT require any other mod to work.

It can work with previous MI2 mods, such as generic, and the other minors, but do NOT use it with MI2 Total.

Known errors
One thing of note, I have noticed an error with cavalry that I cannot seem to make go away. Any help would be appreciated! Thank you!
Popular Discussions View All (1)

[EASY] AstroCat 15 hours ago
@ScottimusMaximus You could try just deleing the infantry files out of the entities folder, and the whole units folder from the Tanks mod.

ScottimusMaximus Sep 13 @ 2:06pm
bamdori11 I've spoken with the author of "Need More Tank More Tank Models" and he more or less confirmed that there's a conflict with his mod and this one. He has just recently updated his mod to include some models for motorised units and I think that that is the issue. Before that mods update, it worked fine with MI3. He suggested that instead of using MI3 Majors, we should try downloading MI2/3 individual countries and see if they work.

Its a shame because both of the mods are incredible and worked well together before the tank mod update.

bamdori11 Sep 12 @ 11:54pm
@ScottimusMaximus i have exact same problem with you. Some nations such as Italian, Czech, British infantry models lost their rifle model, yet other nations like German or Chinese units are fine like before. I don't know from when this issue has created, but at least from yesterday it's still like this.

ScottimusMaximus Sep 12 @ 10:45am
Firstly, I've got to say I love this mod. It seriously helps with immersion. However, there appears to be some sort of issue with the it right now. It doesn't seem to be working for some major nations and others have no weaponry visible with the infantry units. Tried enabling and disabling other mods and running this mod as a stand alone but i'm coming across the same issues. Weird considering it was working two days ago without any hitches. Anyone else running into the same or similar issues?

Mr. Objection Sep 5 @ 6:52am
i'm sorry but cna i ask your permission to use these models on a mod i'm making? of course i will credit you