Store Page
Europa Universalis IV >  Workshop > qweytr's Workshop
This item has been removed from the community because it violates Steam Community & Content Guidelines. It is only visible to you. If you believe your item has been removed by mistake, please contact Steam Support.
This item is incompatible with Europa Universalis IV. Please see the instructions page for reasons why this item might not work within Europa Universalis IV.
Current visibility: Hidden
This item will only be visible to you, admins, and anyone marked as a creator.
Current visibility: Friends-only
This item will only be visible in searches to you, your friends, and admins. 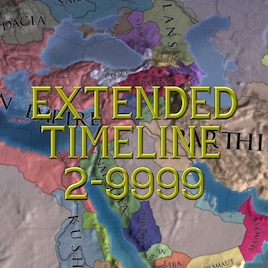 qweytr
Online
See all 3114 collections (some may be hidden)

This item has been added to your Subscriptions. Some games will require you to relaunch them before the item will be downloaded.
Description
PDXCon 2018 Grand Award Winner
"If you are feeling limited by the 400 years scope of Europa Universalis IV, then check out the Extended Timeline mod. For the unknowing, you might think this is just a mod disabling the end date of the game, but instead it's so much more. Play at any period of time between the years 2-9999 and be amazed by the detail in the recreated pre-EUIV world, as well as the present time, fulfill your journey far into the future with new techs, buildings and governments."

Features
- Playable timeline extended to 2-9999.
- Over 500 new countries, each with historical territories and rulers at any given date.
- Added over 100 new provinces removing most wastelands.
- Dozens of new religions, most of which have unique mechanics and decisions.
- New cultures, technologies, units and buildings.
- Hundreds of new events including the fall of Rome, the birth of Islam and the great schism.
- Hundreds of new decisions.

Compatibilities
- Compatible with any combination of DLC. No DLC are required.
- The mod fully supports only English. German, French and Spanish have partial support with some missing localisation.
- Not compatible with most other mods. Only use with other mods if you know what you are doing.

Installation
To download, click the subscribe button above the description and the mod should download automatically. If you want to use direct download instead, it is available in the mod's thread at the Paradox forums.[forum.paradoxplaza.com] Unfortunately I can't add a direct download link here, since that would be against Paradox's rules for user mods.

Thanks
- Septimentus, Tyalas, Leiche, Reloader and Cosmic Hope for the German translation
- Zebenji and G. for the French translation
- Devillris for the Spanish translation
- Veritas et Fortitudo mod for some national ideas
- Serenissima Italia mod for some national ideas
- Extended Vanilla Experience mod for some national ideas
- New World Colony Names mod for new world colony names
- firesoul and stefan.berbece for some of the personal deity systems
- firesoul and Flavius Aetius for some of the new units
- Cirvane for the VCP package adding flavor for Norse and Slavic pagans
- Het for some flavor for Ukrainians
- anthraxus899 for Texan flavor events
- Cosmic Hope, Challenger2008 and others for many dynamic province names
- SaintDaveUK for some flavor for Britain
- zdennis96 for flavor events for pagan religions and Muslims
- Zebenji for some religious flavor events
- firesoul for Roman and Assyrian flavor
- Adtriarior for the European Union
- firesoul, Gojira, Silver Knight of Anor Londo and several others for national ideas
- G. for various descriptions and other flavor texts
- firesoul, Cosmic Hope and Worlds Smuggest Detective for the missions
Popular Discussions View All (1790)

nolan.vouillamoz1908 Jun 19 @ 2:03am
There is problem with gov reform , the countrys can adopt late gove reform even if they are in 1400 and don't have the instituions for

Thar Ravkan Jun 17 @ 4:07am
is this mod updated or what? kinda wanna try it but the comments below me or here says that the AI armies of larger nations doesn't move.

TRIGLAV Jun 15 @ 8:38am
hi does anyone know if there is a mod that keeps vanila idea groups ?

ActuallyPrussia Jun 13 @ 1:00am
are the broken AI armies ever going to be fixed? they literally stand there and do nothing for large nations which makes fighting them way too easy, and having any kind of military subjects completely worthless