Store Page
rFactor 2>  Workshop > ChiefWiggum's Workshop
This item has been removed from the community because it violates Steam Community & Content Guidelines. It is only visible to you. If you believe your item has been removed by mistake, please contact Steam Support.
This item is incompatible with rFactor 2. Please see the instructions page for reasons why this item might not work within rFactor 2.
Current visibility: Hidden
This item will only be visible to you, admins, and anyone marked as a creator.
Current visibility: Friends-only
This item will only be visible in searches to you, your friends, and admins. 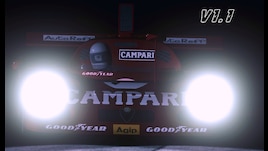 ChiefWiggum
Offline
See all 7 collections (some may be hidden)

This item has been added to your Subscriptions. Some games will require you to relaunch them before the item will be downloaded.
Description
Alfa Romeo 33 tt 12

for a Cup of Coffee:
https://www.paypal.me/postiandchief

thx to:
Postipate for the Physic
nericksenna for the GPA Helmet
Fonsecker for the Sound Samples

The Tipo 33TT12 was Alfa Romeo’s weapon of choice for competition in the World Sports Car Championships starting with the 1973 season. Driven by such legendary drivers as Arturo Merzario, Vittorio Brambilla, Jacques Laffite & Derek Bell, the car finally took World Championship honors in 1975, winning seven out of eight championship rounds.

Hope this message finds you well.I am contacting you because I am trying to see if I can run your beautiful mod and modify it a bit in a league as administrator.


Thank you very much!

dumont Jul 25 @ 4:12pm
thanks for fixing virtual mirror not working