Store Page
Tabletop Simulator >  Workshop > snoggle1981's Workshop
This item has been removed from the community because it violates Steam Community & Content Guidelines. It is only visible to you. If you believe your item has been removed by mistake, please contact Steam Support.
This item is incompatible with Tabletop Simulator. Please see the instructions page for reasons why this item might not work within Tabletop Simulator.
Current visibility: Hidden
This item will only be visible to you, admins, and anyone marked as a creator.
Current visibility: Friends-only
This item will only be visible in searches to you, your friends, and admins. 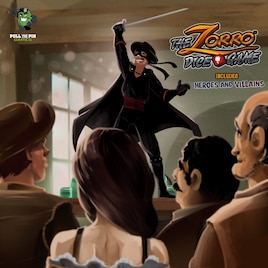 This item has been added to your Subscriptions. Some games will require you to relaunch them before the item will be downloaded.
In 1 collection by snoggle1981
My Official Tabletop Simulator Workshops

6 items
Description
Game Description:
An aging and battle-weary Zorro™ can no longer adequately defend the people from oppression so he must now find a worthy successor. Prove yourself to him by showing your heroism and proficiency in battle by defeating the scoundrels and villains that are persecuting your fellow citizens. After the final battle, it will be clear who deserves to wear the mantle and become the next Zorro™! Will it be you?

Gather equipment in The Zorro™ Dice Game by defeating heroic feats in Yahtzee/King of Tokyo-style dice rolling, either alone or with another player helping. Collect sets of heroic feats to earn more dice that only you can use, but that will also trigger a scoundrel or a villain. Once the villain emerges, whoever defeats them will win the game and become the next Zorro™!

This also includes the Heroes and Villains expansion, which adds more Scoundrels, Villains, Equipment, and support for 1-8 players.

This workshop also includes the second expansion Stunts and Allies:
This expansion to The Zorro Dice Game gives each player an Ally, who will level up throughout the game, providing your hero with special abilities and a subtle catch-up mechanic. If your Ally reaches its max level, you will unlock your own, personal Ally Die as well. But each Ally has a weakness that you have to mitigate as you fight Scoundrels and Villains, which increases the difficulty of the game overall.

Stunt Tokens were added as well, which offer additional opportunities for mid-turn tactics, like switching Heroic Feats or re-rolling dice.

Lastly, it will add more Equipment, Scoundrels, and Villains to the base game as well for additional replayability and more combos to try in your overall strategy.

Learn more at pullthepingames.com or the The Zorro Dice Game Stunts and Allies Kickstarter campaign page

Workshop Details:
This tabletop simulator workshop for The Zorro Dice Game offers high quality components for both the base game and all of it's expansions. When loading the workshop you will have to pick between a multiplayer and a solo setup and wether you want to include the second expansion or not. The game setup reflects the slightly altered setup instructions from the expansion where all scoundrels and villains of a color are put in a pile and shuffled and you will draw the top card from the pile once you encounter the scoundrel or villain.
The workshop offers a lot to make playing your virtual game easier and concentrate on having a good time and enjoying yourself. Some highlights include:


Credits:
The Zorro Dice Game® is a game designed by Brian Henk and Clayton Skancke. It has been published by Pull The Pin Games (formerly named Overworld Games). The game features artwork by Loïc Billiau. All artwork and material used in the workshop is copyrighted by Pull the Pin Games. This is an official workshop that has been created by snoggle1981 in cooperation with Brian Henk from Pull The Pin Games. If you like the game support the designers by buying a physical copy!
< >
4 Comments