Greenlight > Games > cromlech_'s Workshop
Greenlight is being retired. For more information on how to submit games to steam, refer to this blog post.
This item has been removed from the community because it violates Steam Community & Content Guidelines. It is only visible to you. If you believe your item has been removed by mistake, please contact Steam Support.
This item is incompatible with Greenlight. Please see the instructions page for reasons why this item might not work within Greenlight.
Current visibility: Hidden
This item will only be visible to you, admins, and anyone marked as a creator.
Current visibility: Friends-only
This item will only be visible in searches to you, your friends, and admins.
Skara - The Blade Remains
Description Discussions5 Announcements17 Comments580 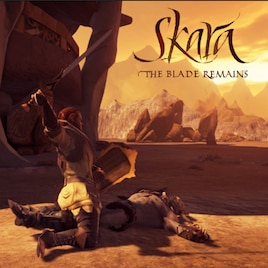 Psyshik
Offline
See all 111 collections (some may be hidden)

View Skara - The Blade Remains in the store

With still more than a week to go before Early Access, the team was incredibly nervous about how people trying Skara at Madrid Games Week would react to it.

That's what makes winning a "Player's Choice" award from the Made in Spain Games area so much sweeter. Despite the limitations of having only one character and one arena to try and a few bugs (Lava didn't always kill, etc.) - players saw the potential of the game-to-be and voted for it.

So, now there is only one more place to try Skara before the Early Access: Poznan, Poland! Skara will be attending the Poznan Games Arena and ZTG as part of Microsoft's ID@XBox program for independent game developers.

Then, the Monday after that, anyone can gain access to Skara on Steam Early Access. Of course, everyone thinking of trying Skara will need to check their computer's specs and remember what an Early Access gameplay is: An early version of a game with a lot of improvement left to go.

Our first character to be released will also be our newest one, the Celea. In anticipation of this, we have been working on armor and weapon upgrades. Below are some designs for the various Celean lance weapons.

We are also planning to have various strengths of armor also available. To balance the game, heavier armor will make your character slower at attacking. It's all up to the player's fighting style.

Finally, see the basic character, in action. Imagine how he will look with upgrades attached!

Read More
Description
Release date: October 2014
SKARA is a free-to-play MOV -- Multiplayer Online Versus game. Unlike simple versus games that have players facing off, SKARA is set in arenas where as many as 16 players can fight at a time.

Players choose from one of the different races, each with unique skills and combat styles. Races divide into teams called factions and fight to ascend in rank. The best players rule their factions, the best factions rule SKARA.

Unlike some versus free-to-play, anyone can kill anyone in SKARA, sometimes with a single, well timed attack. Through unique versus combat technology, players can control the direction of their attacks and make specialized combinations, block and dodge their enemies and counter-attack. The Combat system will be customizable and players will be able to unblock new movements, special attacks and even fatalities as they progress in the game.

SKARA rewards its best fighters. We value fair fights, so characters are never leveled up to the point where nobody can kill them. The only way to progress is to beat your enemies in the arena.

Rankings will determine who the best players are, given the numbers of casualties, successful battles and any truly epic performance. Only the best fighters will get the opportunity to try these features. They include creating factionsm invite others players to play in and dominate other clans. Leading players will be able to conquer arenas and even build their own powerbase!

SKARA aims to be a leading eSport game. We plan competitive tournaments on top of the melee arenas.

Are you ready to join in?

wrao Oct 25, 2014 @ 6:25am
Will you make a special discount during the first week of early access to attract more players? Just the key I meant no in game currency/exculsive stuff etc.

cromlech_  [author] Oct 23, 2014 @ 1:15am
Skara will cost $19 at the beginning but we´ll give you back the same amount in virtual currency to spend in our store. When we have the six arenas and five characters ready we´ll release the game as a free to play.

will we have to buy skara then or will it be free?
< >

Skara - The Blade Remains has been Greenlit and is now listed in the Steam store. For the latest information, purchase options, and discussions for Skara - The Blade Remains, please see it on the Steam Store or in the Steam Community.
Visit Store Page
For more details Visit Community Hub
For latest discussions
If you really, really want to, you can continue to the Greenlight page. Information on this page may be out of date, since all the action has moved to the areas noted above.