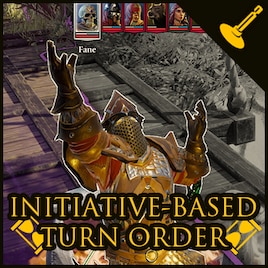 This item has been added to your Subscriptions. Some games will require you to relaunch them before the item will be downloaded.
In 1 collection by Odinblade
Odinblade's Definitive Mods

12 items
Description
This mod requires Norbyte's Script Extender[github.com] to use.
Dislike the "ally turn, enemy turn" nature of D:OS2's round-robin system? Wish that your initiative had a bigger impact on the turn order? This mod changes the combat turn order whereby players and enemies will act in order of their initiative.

How does it work?
With this mod enabled, the turn order is decided entirely based on initiative values, rather than providing a mixture of allied and enemy turns like the base game does:

In the example above, Fane has the highest initiative and therefore moves first. The Magisters then have the next highest initiative values, meaning they go next in the new turn order. In the previous system, Lohse would act after the first Magister's turn despite having lower initiative than the other enemies.

Is it balanced?
It's hard to vouch for the balance of this combat system, and it's not been extensively-tested. However, it can provide a new combat dynamic to spice-up your next playthrough. I'd love to hear how you find the system after using it, as your feedback could inspire some alternative options and improvements in the future.

How do I install the Script Extender?
Check out my installation guide here. Alternatively, if you are using LaughingLeader's excellent Mod Manager[github.com], you can simply click the "Tools" option at the top of the window, and then click "Download & Install Osiris Extender". Easy peasy!

Known defects
Credits
HUGE credit goes to Norbyte for providing the initiative-sorting code, as well as creating the Script Extender.

Byrne Feb 18 @ 3:38pm
Honestly there is much complaining about the base initiative of some targets in the game, and this can be true in some cases, but I figure there are also people confusing the "initiative hacking" some enemies have with the game sort of "alternating" enemy/ally/enemy/ally turn order instead of being initiative based.

As far as I know, it is/was impossible to get initiative over Alice Alisceon, Redeka, Djinn, "Doctor Daeva", and several other enemies regardless of how much you put in wits. It incentivises you to use cheese tactics like Five Star Diner and Res all potions and Nimble Tumble -- like a cheese arms race.

That's what I want fixed above all.

. Feb 1 @ 7:07am
I feel that this is more balanced than the standard turn order mechanic. In vanilla you have little reason to give much of a shit about initiative. With this mod you'll think twice before swapping out that gear with +6 initiative just to get 1 or 2 stat points that increase damage or give a little more armor. It also makes wits more important for things that aren't aiming for higher crit chance. It just makes more sense this way, I'll never uninstall this mod.

Also, lol at the dude who got butthurt and blamed a mod when it's his own fault for not adjusting his build priorities. And in regards to some enemies suddenly moving up in turn order...you do realize you can temporarily raise your wits mid-battle, right? Wits increases initiative which may modify the turn order.

gray Jul 21, 2021 @ 2:24pm
He's just explaining how it changes the balance. Thanks for the insight, Pigbangbang

Kitmuri Jun 13, 2021 @ 5:14pm
Pigbrainbang, you downloaded a mod that tells you what it does, then complain about it doing what it says it does???

pbangbang Mar 28, 2021 @ 9:10pm
After 3 ruined honor solo i realized that it is this stupid mod that makes a mess with turn order and makes combat with high level enemies impossible. Higher level enemies simply annihilate you before your turn even you have 2 rebirth idol. Some enemies with lower initiative will suddenly attack first after a few turns inside a combat, forcing you to play extremely safe. Rubbish mechanic and not fun at all.

Buzzkill Jan 1, 2021 @ 8:32am
Like people have said, its great for the first parts of the game, once you hit late act 2 and beyond enemies start to have 30+ initiative as a BASE before wits, making entire enemy parties move before you.

My party got TPK'd in the act 2 red prince lizard ambush, on round 1 without getting to do anything.

Shura Dec 11, 2020 @ 10:16am
This reminds me of HoMM5 initiative system which i like a lot, you would think it make things more fair for your enemies and give you a challenge so you can't just ignore wits anymore. But as people said before some enemy just have ridiculous 30 initiatives (before wits) . I would recommend NOT use this on your first playthrough to make sure you know when and where the fights start so you can better position your chars unless you want them all to die/disabled before you can take your first turn and then kinda forced to reload a save.
< >